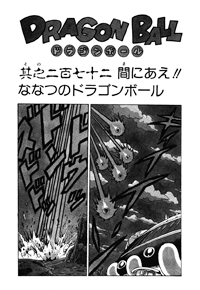 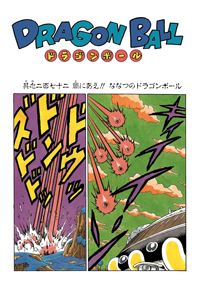 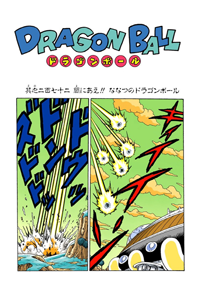 Make it in Time!! The Seven Dragon Balls

The five ships land right in front of Freeza’s space ship, and he’s glad to see that they’ve arrived. Vegeta, Kuririn, and Gohan then arrive at the spot where Bulma is hiding. They swoop in, take, the Four-Star Ball, and fly off again. Bulma wonders what just happened, and why they were with Vegeta. Meanwhile, Freeza is now on the roof of his ship, inside of his hover pod once again. The five Ginyu Special-Squad members have emerged from their ships, and fly up to the top of Freeza’s ship. They each strike a pose and introduce themselves: Recoom (a tall, human-looking man); Butta (a tall blue man); Jheese (a medium-sized, long-haired pretty boy); Gurd (a short, fat, and ugly four-eyed alien); Ginyu (a medium-sized, purple alien with horns on his head). “Together we are… the Ginyu Special-Squad!!!!” Freeza is not amused by their posing. Ginyu then asks Freeza to please tell him their mission.

Freeza explains that Vegeta has taken the Dragon Balls he’d gathered, and so he wants them to go find Vegeta, knock him around a bit, and bring him back here to tell them where he’s hiding the balls. Ginyu says that’s no problem, and that their scouters have already located him. He seems to be moving at a high speed not far from here, and he has two people with him who have fairly high Battle Powers. Freeza says it must be those two people from before, and tells Ginyu to kill them. Jheese then gives Freeza a case of scouters as he requested. Ginyu says they’ll go now, and he and the others fly off. As they do so, Vegeta notices they’ve started moving. Meanwhile, out in space, Goku’s ship is scheduled to land on Namek in twenty minutes. He wakes up and puts on a new dōgi (this one has his own “go” kanji on the front, the same “go” used to write Goku.) Now that’s he’s dressed, there’s only ten minutes left, and he tells everyone to stay alive until then. Vegeta, Gohan, and Kuririn arrive at the spot where Vegeta’s Dragon Balls are, but the Ginyu Special-Squad lands right in front of them. “Yo, Vegeta-chan” Ginyu says. He asks if those things they’re holding are Dragon Balls, while Recoom notes that there’s five more behind them. 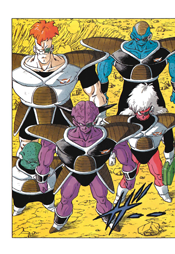 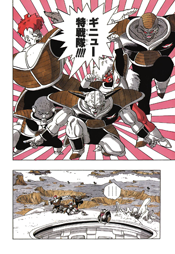 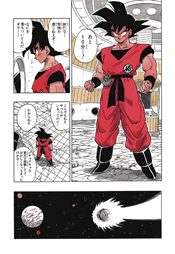