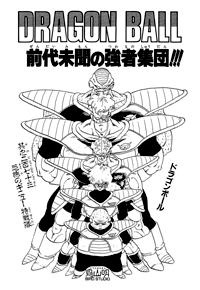 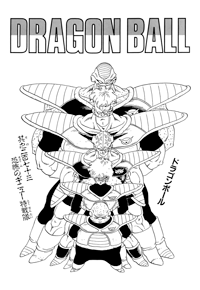 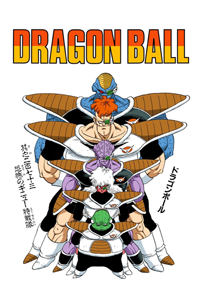 Ginyu says that with the five behind them and the two they’re holding, this must be all seven Dragon Balls. Vegeta says he won’t hand them over, so Ginyu says he’ll have to take them forcibly. Kuririn thinks to himself that Vegeta was right about how incredible these guys are. But then he looks over at Gurd, and thinks he’s actually not that great at all, and wonders what he’s doing with them.

Vegeta says that even though their scouters can find people, they can’t use them to find the Dragon Balls, then tosses the One-Star Ball off into the distance. But in a split second Butta flies off, catches it, and brings it back. Vegeta can’t believe it, and Ginyu explains that Butta is the fastest in the universe. Ginyu says there’s one more left, and Vegeta turns to Kuririn and yells at him to break it. Kuririn raises his fist into the air to break the Four-Star Ball, and prepares to bring it down, but then… Gurd does something, and suddenly the Four-Star Ball is gone from Kuririn’s hand. It’s in Gurd’s hands now, and Gohan and Kuririn wonder what just happened. Vegeta says the rumors must be true about Gurd, that he can control and stop time. Ginyu says that now that they all seven, it’s their turn. Kuririn asks if they’ll have to fight now, and Vegeta says Kuririn probably knows running is pointless. Ginyu says he’ll take Vegeta, and the rest of them should do Rock-Paper-Scissors to decide on the other two. The others protest, and so Ginyu says he’ll take the Dragon Balls back to Freeza and the best at Rock-Paper-Scissors will fight Vegeta, and the second best will take the other two.

So they start playing Rock-Paper-Scissors, and Gohan wonders if they couldn’t run away right now. Recoom wins, so he gets Vegeta, and Gurd gets second, so he has Kuririn and Gohan. Ginyu telekinetically takes all seven Dragon Balls into the air, and flies off to give them to Freeza. Gohan prepares to try to stop him, but Vegeta yells at him to stop since it will just waste his energy. Vegeta tells Kuririn to come here. He tells him and Gohan that Gurd, whom they’ll be fighting, has a low battle power, though he can use Chōnōryoku (supernatural powers). He then asks Kuririn if Kakarrot also came to this planet and Kuririn says he didn’t, but he’s on his way now, and should arrive soon. Vegeta wants him to hurry, as they could really use another ally. Gohan doesn’t like the way things have gone at all, and then Recoom says they should start playing now.

Recoom tells Gurd he should get rid of the two little guys first, and Vegeta says they’re acting like this is a game, as usual. Kuririn tells Gohan to remember their image training from the space ship, as Gurd tells them this is the end. Kuririn yells at Gohan to unleash his ki, and the two begin powering up. Then they each fly up into the air in opposite directions, and fire ki blasts down at Gurd. 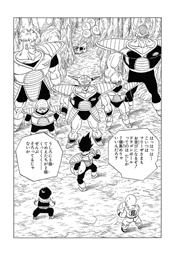 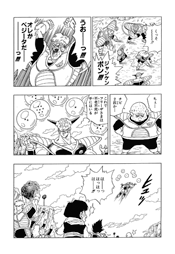 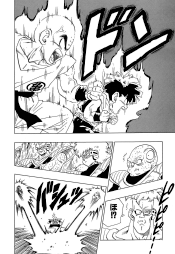