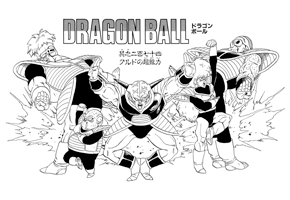 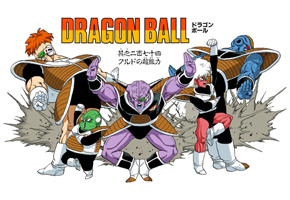 Gurd yells “STOP”, time freezes, and moves out of the way of the two blasts. He prepares to use his Chōnōryoku on them, but when he looks up into the air, they’ve moved quite a ways away. Then time unfreezes, the two blasts hit the ground, and Gohan and Kuririn start moving again and notice Gurd has moved. They head towards him and then vanish, so Gurd yells out “STOP” again. They’re both stopped mid-air diving towards him from opposite sides, and Gurd thinks if he attacks them while time is stopped, it’ll use too much energy. So Gurd runs over to hide behind a rock, and thinks those brats won’t find him there. Then he unfreezes time, and Kuririn and Gohan know where he is anyway. Gurd freaks out and says he can’t stop time anymore as they fly towards him.

They suddenly stop mid-air, and Gurd says he’s using Kanashibari no Jutsu (paralysis technique).He wonders how they knew his location without using scouters, and then wonders if they taste good. Meanwhile, the other three Ginyu Special-Squad members have moved to another spot, and Jheese says this was unexpected, with those little guys having battle powers over 10,000. Butta says they’re of an unusual race if they can alter their battle powers without transforming, and Recoom says Vegeta has good friends. Vegeta thinks they were stupid for attacking from the front after he’d told them to be careful of Gurd’s Chōnōryoku. Gurd telekinetically rips a little tree out of the ground, then cuts the top off. He decides he’ll first skewer Kuririn with it, and then he’ll use a different type of Chōnōryoku to play with Gohan. He throws the tree up toward Kuririn, but…

Vegeta suddenly chops off Gurd’s head, which frees Gohan and Kuririn from the Chōnōryoku, and they quickly fly out of the way of the tree. Gurd’s head tells Vegeta that was dirty, as this was just supposed to be a game. Vegeta responds that nothing is dirty in war, and Gurd comments about the Saiyans being vulgar monkey bastards. Vegeta finally gets fed up of him talking and blasts his head. Kuririn and Gohan thank Vegeta, but he says he wasn’t saving them, it was just the perfect chance to defeat Gurd. Vegeta says this is the end of their good luck, though. Jheese and Butta can’t believe Gurd’s been killed, and Recoom says their special fighting pose won’t be pretty anymore. They’ll have to think up a new pose for only four members now. Jheese and Butta then do Rock-Paper-Scissors to decide who’ll take on the two little guys now, as Vegeta says from here on out, it’s going to be Hell. 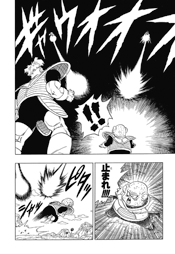 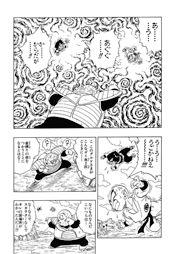 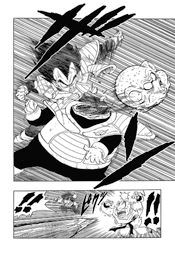