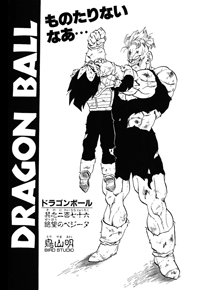 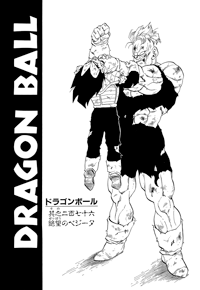 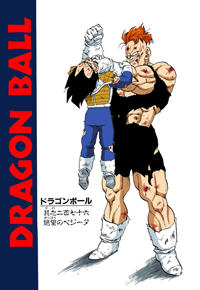 No Hope for Vegeta

Vegeta is sent flying backwards, but he catches himself and bounces off the ground, then flies towards Recoom with a punch, but Recoom blocks it. Vegeta punches at him a whole bunch more, but Recoom blocks them all. “Good!! Very good!! You’re doing better than I thought, Vegeta-chan!!” Then Recoom elbows Vegeta on the head, and knocks him down to the ground. Recoom comes down to hit him again, but Vegeta jumps up backwards. Recoom flies after him, and so Vegeta curves his direction and throws a blast down toward Recoom. Recoom yells “Speed up!!!!” to dodge it, then ends up in the air right behind Vegeta, and kicks him down into the water. Vegeta swims around underwater for a while, and then darts up out of the water, and headbutts Recoom in the stomach. It knocks the wind out of Recoom for a bit, but then Recoom grabs Vegeta by the waist, pulls him over his head, and dives straight down, driving Vegeta head-first into the ground.

Recoom pulls Vegeta up and holds him by his leg, and asks if he’s really exhausted already. Vegeta suddenly holds out his hands and blasts Recoom right in the face, knocking him backwards. Vegeta slowly stands back up, as Recoom hops back up as well. Recoom looks busted up, but isn’t worn down at all. Vegeta, however, looks really bad, and is short of breath. Vegeta is pissed about the situation, and thinks he’s being treated just like a baby, and he’ll die soon. Kuririn says that if Vegeta gets killed, they’re next. He doubts they could win even with Goku, and tells Gohan they should rush in to help. Meanwhile, there are two minutes until Goku arrives on Planet Namek… 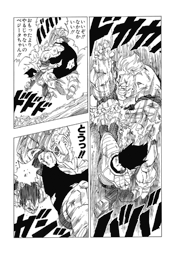 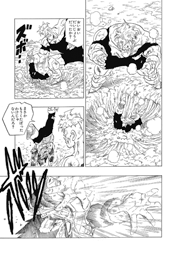 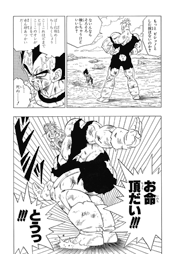