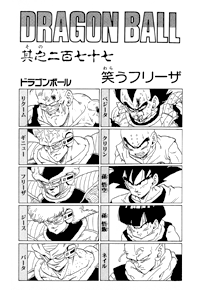 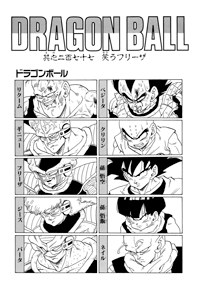 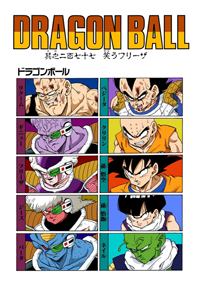 Recoom says this is the finish, and Kuririn tells Gohan they’ll go now, since Vegeta no longer has the strength to avoid a quick attack. “Recoom Eraser Gun!!!!” Recoom shoots a huge blast from his mouth toward Vegeta, and that’s when Gohan and Kuririn take off. Vegeta weakly tries to dodge it, and then Kuririn lands knee first atop Recoom’s head, closing his mouth and cutting off the rest of the blast. Gohan, meanwhile, grabs Vegeta and moves him out of the blast’s path. The blast collides with an island and there’s a huge explosion. Vegeta tells Gohan to hurry up and move, and says they were stupid to help him instead of attacking. Kuririn notices the ground over there is gone and the shape of the planet has been altered because of that attack. Recoom gets up, with smoke coming out of his mouth, and he says thanks to Kuririn, his teeth are gone, and his head’s messed up, too. He calls over to Jheese and Butta and asks if he can kill these two little guys too. They say okay, so long as he gives them chocolate parfait instead.

Recoom is glad to hear it, and then kicks Kuririn hard and sends him flying. Gohan flies over to him, and can’t believe his bones are all broken. Kuririn says he’s too strong, even with the power he got from the Eldest, and thinks it’s all over. Recoom’s disappointed Kuririn can’t play anymore, and Gohan realizes it’s up to him. Meanwhile, Nail is headed their way, and hopes the Earthlings will forgive him for being so late, since his duty was to protect the Eldest. Gohan gets hit, but he lands on his feet, and fires what looks like a Masenkō at Recoom. But Recoom blows it back Gohan’s way, and Gohan just barely manages to jump out of the way. Recoom then comes from behind and strikes Gohan in the neck. Elsewhere, Freeza compliments Ginyu’s speed in retrieving all seven Dragon Balls, and thinks now he can finally be granted eternal life. Ginyu thinks they should have a victory dance, but Freeza says maybe another time. Freeza stands over the Dragon Balls and prepares to begin, as Gohan coughs up blood and says, “F-fath-er…” 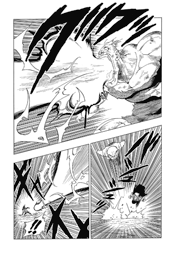 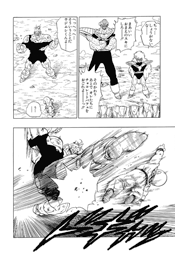 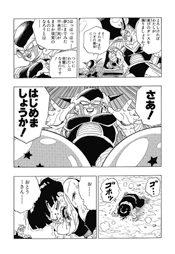