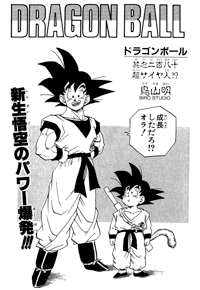 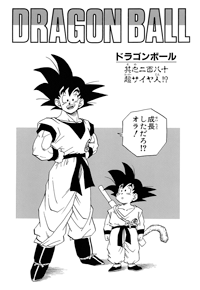 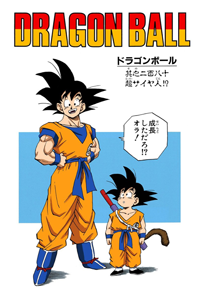 Recoom thinks this guy is weird for laughing when he’s going to be killed, but Goku tells him he can’t win. Recoom thinks that’s hilarious, but Kuririn says that Goku isn’t one to bluff about stuff like that. Vegeta thinks to himself, “Could it be… No… Such a thing is impossible… That bastard low-class warrior Kakarrot… couldn’t have become a legendary Super Saiyan…!! Super Saiyan appear once every thousand years… Any fighting genius Saiyan who overcomes the unsurpassable wall… But, that’s just supposed to be a stupid legend… Even if the legend was true, the only one who should be able to become a Super Saiyan is me.” Recoom says it’s time to shut Goku up now, and prepares his attack. “Ginyu Special-Squad!! Recoom… Mach… Attaaaaaaaack!!!” Recoom rushes at Goku, but Goku disappears at the last second, and Recoom hits nothing but air.

Everyone wonders where he went, and Jheese and Butta notice Goku is now right behind them. Goku tells them they should leave, and then goes back over near Recoom. Kuririn takes note that Vegeta was the only one who even noticed Goku’s movements. Recoom still isn’t worried, however, and prepares to finish off the four of them. “Recoom… Ultra… Fighting…” Goku suddenly flies in and elbows Recoom in the stomach while he’s powering up, and Recoom slowly doubles over and falls to the ground. Kuririn, Gohan, Jheese, and Butta can’t believe this. However, Vegeta says, “Damn him… That was no ordinary attack… My eyes weren’t deceived… That was an absurdly severe strike… He’s evidently overcome a Saiyan’s fighting level… He’s a completely different person than I fought on Earth… What the Hell kind of practice has he had… Was the legend true…?! Is he really a Super Saiyan…?!” 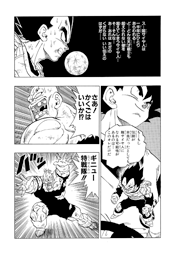 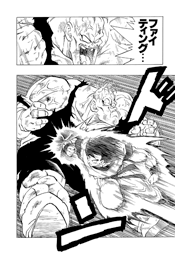 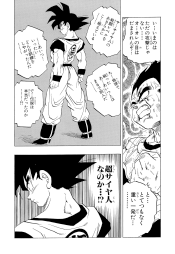