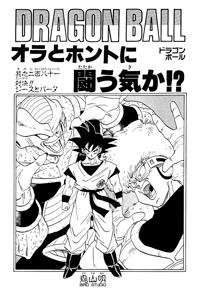 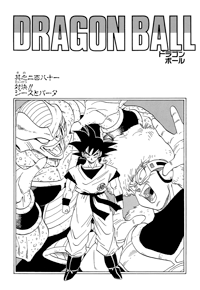 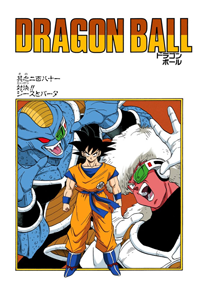 Goku looks over to Jheese and Butta and asks them if they’ll go back to their own planet, or end up like him. They’re not worried, however, and Jheese says they’ll just have to settle this now. Vegeta knows Kakarrot will win. They fly over to Goku, and Jheese stops in front of Goku, and Butta behind him. Jheese starts to talk about what happens when you mess with the Ginyu Special-Squad, but Goku just punches him in the face, busting his nose. Goku asks if they weren’t too negligent there. Jheese gets pissed and kicks at Goku, and Butta elbows at him, but Goku holds off both with a hand each. He knees Jheese away and sweep kicks Butta, then unleashes a kiai sending them both flying off even farther.

Kuririn can’t believe he blew them away with just a kiai, and Gohan says they’re not as strong as he thought. Kuririn says that isn’t it, though, as even Vegeta was no match for them, and Recoom was around the same. It’s Goku. Jheese wonders what’s going on, as his battle power is unmistakably only 5,000. But Vegeta knows his battle power briefly raises at the moment of attack, and figures Kakarrot is doing this to not waste energy. Butta tells Jheese via scouter to use his Crusher Ball. Butta explains that since he’s the fastest in the universe, he’ll attack Goku if he tries to run away. Jheese agrees and creates a big ball of ki, and swats it like a volleyball toward Goku. Goku doesn’t move until the last second when he knocks it away, and it nearly hits Butta. Jheese can’t believe he deflected it, as Goku suddenly appears mid-air behind Butta. 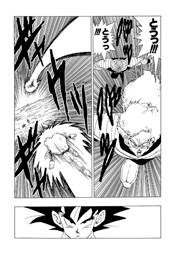 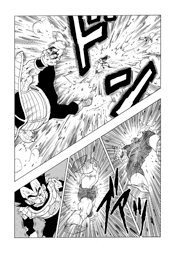 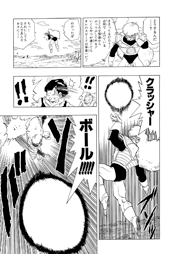