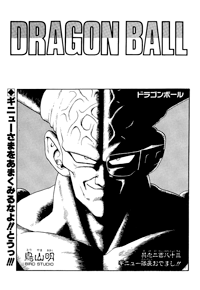 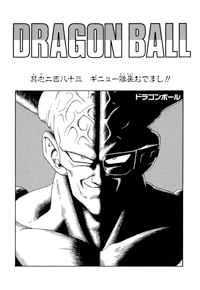 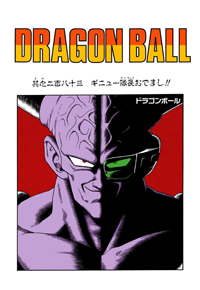 Goku asks if he really stands no chance against Freeza, and Vegeta says it’s true. “If you intend to fight Freeza, you’d better be prepared. Freeza’s strength is well beyond your imagination.” Kuririn goes on about how easily Goku completely defeated those guys, and so Vegeta says to go fight Freeza then. He also says Freeza has probably received immortality from the Dragon Balls by now, and thinks they should just pray they don’t bump into him. Kuririn doubts that, though, and explains that if it’s like Earth the sky should get black when Shenlong appears. Vegeta asks what Shenlong is, and if that’s what comes out when the Dragon Balls are gathered. But Goku realizes Freeza probably doesn’t know the password, so there’s still a chance for them to have their wish granted, and they get excited about returning their dead friends to life.

Jheese has made it back to Freeza’s ship, and Ginyu can’t believe that Gurd, Recoom, and Butta have all been killed. Ginyu then confirms that he can’t find them with his scouter. Jheese wonders if they shouldn’t contact Freeza, but Ginyu says he wants to handle this personally. He tells Jheese to hide the Dragon Balls, as Freeza would be pissed if they were stolen. So, he buries them right next to the ship. Then they prepare to leave, and do their fighting pose. But Ginyu realizes their “Special Fighting Pose” is no good with only two of them and gets really pissed, then the two take off. Back at the battlefield, Vegeta asks if he plans on defeating Freeza, and Goku says maybe, but first he needs to return everyone to life that was killed on Earth. And he mentions how Kaiō told him not to fight Freeza. Vegeta tells him it’s pointless to waste a wish on that, and should instead give him immortality.

Kuririn thinks that would be no better than if Freeza had immortality, and Vegeta notices there are two battle powers coming this way. Jheese has come back and brought Captain Ginyu with him. Vegeta says this time it’ll be difficult even for Kakarrot, and Kuririn is worried. Then Vegeta wonders where Freeza is, since he’s not at the spaceship where Ginyu took the Dragon Balls. Goku says he feels a strong ki over “that way”, and figures it must be Freeza. But Kuririn and Gohan freak out, because in that direction is where the Eldest lives. Kuririn realizes he must have gone to a Namekian to find out how to get his wish granted, and Goku asks if he is the creator of the Dragon Balls. Gohan realizes Freeza will probably kill the Eldest if and when he tells Freeza how to get his wish. “Freeza doesn’t know that once the Eldest dies, the Dragon Balls are also gone!”

Vegeta is surprised to hear this, as Jheese and Ginyu come flying in. Kuririn asks if he can win this time, and Goku says, “I won’t know unless I try.” Goku thinks this guy seems much stronger than the others, and Ginyu notices his battle power is about 5,000. Jheese says it’s really strange that he’s only 5,000, and Ginyu calls him an idiot and explains how foolish it is to rely on a scouter’s figure. He figures this guy must be the type that can instantly raise their battle power, and guesses his actual battle power must be around 60,000. Jheese can’t believe a Saiyan would be that strong, but Ginyu says he might be a special genius born fighter like they are. Goku says he’ll hold this guy off while they go get the Dragon Radar and search for the Dragon Balls. Goku asks Vegeta to defeat the other guy, and says Vegeta must’ve gotten a lot stronger from recovering from near death. Vegeta’s surprised he knows that. Then Kuririn and Gohan take off, and Jheese says they’re getting away, but Ginyu says they’re just small fry. Goku says now they’ll go, too, but then Vegeta suddenly takes off and leaves Goku by himself, as Ginyu rushes in! 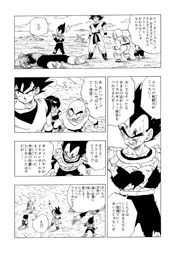 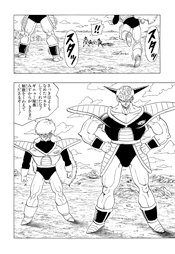 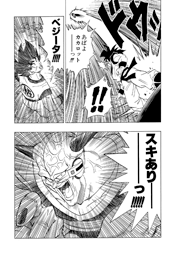