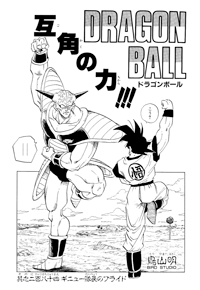 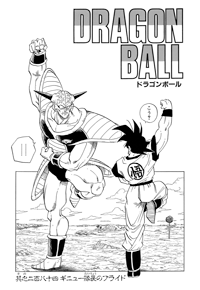 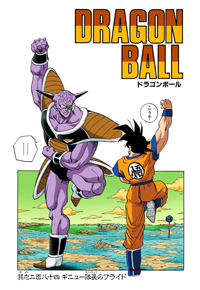 Ginyu elbows Goku in the face and sends him flying, but Goku lands on his feet. Ginyu appears behind him and swipes at Goku, but Goku ducks it, then kicks back at Ginyu. The two of them trade punches, and then break. Goku is pissed at Vegeta. Speaking of whom, Vegeta says to himself that Kakarrot and Ginyu are about the same strength, and hopes they finish each other off. In the meantime, he’ll get those two runts to tell him the password for making a wish, then be granted immortality and fight Freeza. Ginyu tells Goku that he’s actually also the type that can freely alter his battle power. Jheese thinks to himself that even if that guy is 60,000, Captain Ginyu still has a much greater battle power.

Ginyu charges up and unleashes a huge blast, but Goku jumps up into the air out of the way. Goku comes down behind Ginyu and tries to kick him in the back of the head, but Ginyu ducks it. Ginyu swipes at Goku, but Goku disappears and reappears at Ginyu’s side, and Ginyu blocks a kick. The two then exchange a few punches, until Ginyu flies up into the air. Goku does the same, much quicker and much higher, and Ginyu can’t believe his speed. A blast then comes up at Goku, which he only just barely avoids, and Ginyu comes up from behind and locks Goku in a Full Nelson position. It was Jheese who’d fired the blast, and Jheese yells up telling Ginyu to break his bones. Goku thinks he has no choice but to use Kaiō-Ken, but then Ginyu releases him. He yells at Jheese that he didn’t ask for help, and says he wants to do this on his own. He says he’s noticed Goku hasn’t been using his true power and figures he’s saving that for Freeza. Goku says he’ll show him his real power, and tells him to watch on his little power-detecting device. Then Goku starts powering up using the Kaiō-Ken, and Ginyu freaks out as his battle power goes to 90,000, then 100,000, 110,000, and continues to rise. 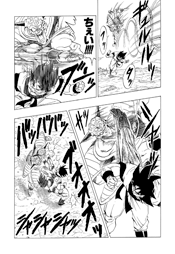 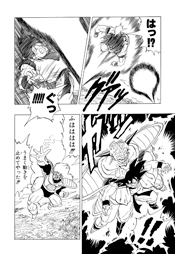 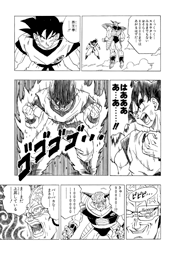