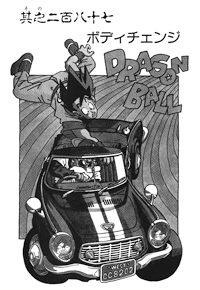 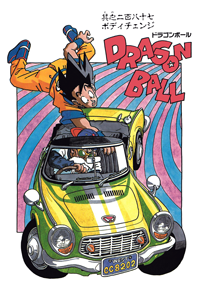 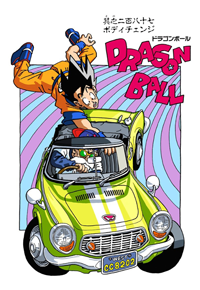 ‘Ginyu’ (clearly speaking like Goku) asks, “How come I’m over there…?!” ‘Goku’ says because they’ve switched bodies, and ‘Ginyu’ wonders about this as Jheese gives ‘Goku’ back his scouter. ‘Goku’ says they’ll return to the spaceship now, and loves how fast this body can fly. ‘Ginyu’ says he can’t move, and figures this must be why he injured himself. “Oh no…!! As things are, what if I, no, they meet up with Kuririn and Gohan…!!” ‘Ginyu’ weakly tries to fly off, but he can’t move much, and worries that with a face like this he’ll scare Chi-Chi when he gets home to Earth.

Kuririn and Gohan reach Bulma’s hideout, wake her up, and ask her for the Dragon Radar. But first she yells at them about running off with Vegeta and leaving a girl here all by herself. Kuririn weakly asks to hurry and give them the Dragon Ball so they can make a wish. She can’t believe they still haven’t made a wish, and yells how the radar says they’ve got all seven together. Then Gohan gets the radar and says they’re in that direction, and they prepare to leave. Bulma yells at them to tell her what’s going on first, but Gohan says they’ll explain later, they have to hurry now. “Oh yeah! Father has made it here!” Bulma gets excited to here that, and Kuririn says they need to hurry, and the two fly off. Bulma thinks of how wonderful Goku has gotten, and how much she argues with Yamcha, and thinks she had picked wrongly.

Vegeta arrives at Freeza’s ship, and notices Freeza isn’t there, so he goes inside. He doesn’t see the Dragon Balls anywhere, and wonders where they’re hidden, or if Freeza took them with him. But he figures those Earthlings can use their weird device to find the Dragon Balls anyway. He decides to change into some new battle armor in the meantime, while wondering about the strange medicine Kakarrot gave him that healed his wounds and restored his strength. The only type of battle jacket in his size is an old type, but then he notices the Earthlings have made it there. Gohan and Kuririn stop outside the ship, notice no one’s here, and that the Dragon Balls aren’t in the ship. Gohan finds the spot where they’re buried, and so they start to dig them up. Vegeta watches on, thinking of how he’ll get rid of them once they summon this Shenlong. They finally have all the Dragon Balls and Kuririn yells, “Come out, Shenlong!!!! And grant me my wish!!!!” But…nothing happens. Kuririn wonders why Shenlong isn’t coming out, and Gohan thinks maybe the words are a bit different here. Then they all notice someone’s coming. There are two evil ki, so it must be Ginyu, and they worry about what happened to Goku. Kuririn and Gohan both hide and lower their ki as ‘Goku’ and Jheese land near the ship. 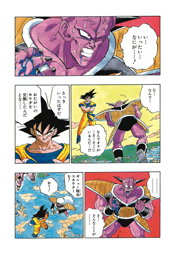 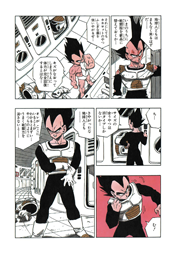 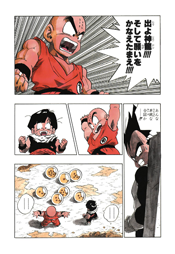