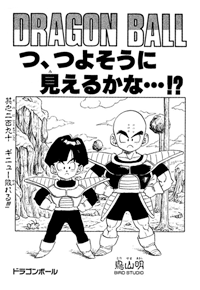 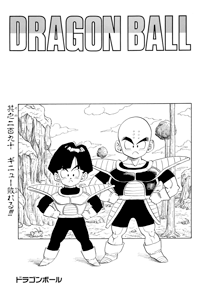 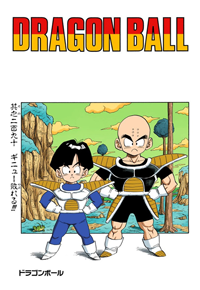 Vegeta dives straight down toward ‘Goku’, and then ‘Goku’ smirks and yells, “CHAAAAAAAAANGE!!!!!” But then ‘Ginyu’ realizes he can return to normal, and flies over and just barely gets in the way of the big flash of light shooting up at Vegeta. And now, Goku is Goku and Ginyu is Ginyu again. Ginyu is pissed that Goku got in the way. Goku laughs and says he hurts, but he’s back to his old self. The other three wonder what just happened, until Gohan realizes that Father has his own body back. Ginyu thinks that he’ll definitely exchange bodies with Vegeta this time, and there should be no more interruptions. Goku says he’s too damaged to move, and is worried what will happen if Ginyu gets Vegeta’s body this time. Vegeta isn’t sure which is Ginyu, as Ginyu laughs and prepares to use his body change technique again. Goku suddenly spots a frog and gets an idea. Just as Ginyu yells “CHAAAAAAAANGE!!!!!” Goku throws the frog into the big flash of light shooting up toward Vegeta, and the two of them switch bodies.

Vegeta wonders what just happened, as Ginyu gets a blank expression and then starts hopping away on all fours. Gohan and Kuririn fly down to the ground, help Goku up, and ask if he’s okay. He says Vegeta really beat up his body, but Vegeta wants an explanation of what just happened to Ginyu. Goku says the one who just ran away was the frog, and the frog over there is actually Ginyu. Vegeta says he doesn’t quite understand it, but says he’ll squash the frog. Goku says to leave him alone, since he can’t do anything else. Vegeta decides to let him go after all, and Ginyu hops away. Kuririn asks Goku if he has anymore Senzu, but he doesn’t, and Vegeta laughs about how pathetic they are right now. Kuririn starts to get angry, but Goku says not to worry because Vegeta won’t kill them. Vegeta says that’s right, since he’ll need them to fight Freeza, especially Kakarrot. Speaking of, he says Kakarrot needs medical treatment, and tells them to bring him in the ship. Vegeta thinks he won’t need them anymore once Freeza is defeated, as Goku sits in a medical machine. Kuririn wonders if he won’t drown in there, as Goku thinks it feels good. Vegeta looks at the other two and tells them they need some battle wear. Kuririn wonders what he means, as Gohan thinks it’ll be bad for their image. 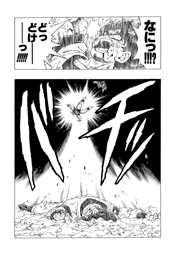 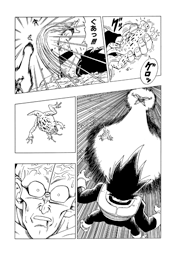 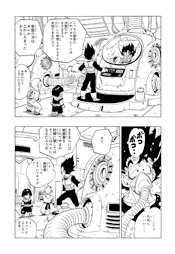