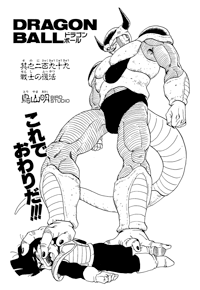 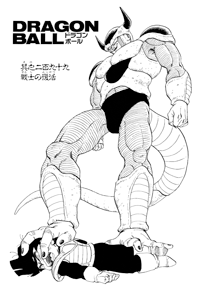 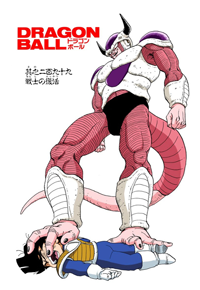 Freeza continues stepping on Gohan’s head, and asks Vegeta if he won’t come to save him. Vegeta thinks to himself that he doesn’t care about the brat, but Freeza’s power is well beyond what he’d imagined. In the medical machine, Goku notices Gohan’s ki is rapidly dropping… he’s dying! Goku knows he has to wait until he’s healed before he can help, but then he notices something. Freeza says this is the end for this brat, but then stops. He turns to look at something and suddenly jumps off of Gohan as a Kienzan comes at him and cuts off half of his tail. Freeza and Vegeta are shocked to see Kuririn is fully healed, with just the hole in his battle jacket. Freeza can’t believe it, as Kuririn proceeds to launch a whole cluster of Kienzan at him. Goku notices Kuririn’s ki is revived, and wonders how, as Freeza dodges everything.

Kuririn sticks his tongue out at Freeza, and flies off with Freeza chasing him. Freeza soon gets in front of Kuririn, and they both stop. “How you’ve been revived, I don’t know, but… How dare you cut off the tail of Freeza…!! This time, you won’t be revived twice. I’ll blow you to bits!!!!” Kuririn knows he can’t stand up to Freeza, but at least he’ll keep him busy for now. “Taiyō-Ken!!!!” While Freeza is blinded, Kuririn yells at Vegeta to attack. But Vegeta is busy looking at Dende, who is healing Gohan. Vegeta realizes that’s how the other one was healed, as Kuririn asks Vegeta what he’s doing. Vegeta is pissed they didn’t tell him about the Namekian brat having that ability, but Kuririn says they didn’t know either until now, otherwise they’d have had him heal Goku. Gohan thanks Dende, and then heads into the air next to Vegeta and Kuririn. Vegeta is amazed how much his battle power has gone up thanks to his Saiyan blood, as Freeza gets pissed that the other brat is healed now too. But then everyone notices something is coming their way. It’s Piccolo! 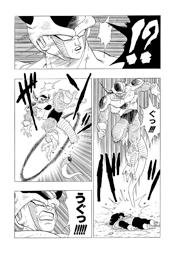 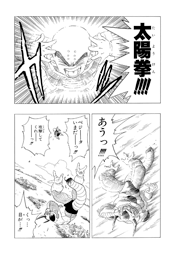 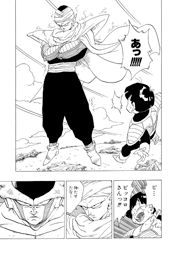