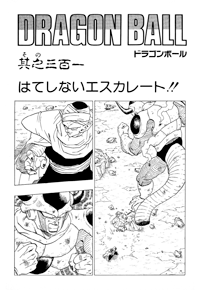 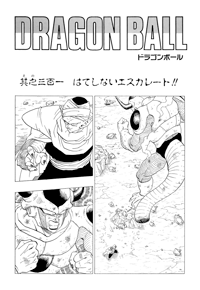 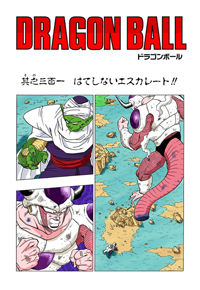 Kuririn is impressed that Piccolo is fighting equally with Freeza, and Vegeta says he’s more than equal. Gohan is glad Piccolo is so strong, while Vegeta wonders how the Hell he got so strong since they fought on Earth. Freeza touches down in front of Piccolo and smirks, then elbows Piccolo in the face and knocks him face-first into the ground. Freeza tries punching down at him, but Piccolo heads up into the air, so Freeza follows. Freeza gets above him, and hammers Piccolo down into the ground, causing an explosion. Freeza touches down, as Piccolo stands back up, all busted up. Freeza laughs at him, as Vegeta can’t believe he’d intended to fight such a monster.

Piccolo spits and takes off his cloak, then turban. He cracks his neck and his knuckles, and says it’s time to get serious. Kuririn can’t believe he’d had those heavy things on all this time. Piccolo starts to get pissed, but Freeza says he hasn’t been serious either. Freeza explains that he wasn’t here to see him transform, and wants to give him the same terror that Vegeta and the others received, that feeling of despair. Freeza tells him that when he transforms, his power greatly increases. But he still has two more transformations left after this one, and everyone freaks out when they hear this. “I’ll show you!!! You should think of this as an honor!! You’ll be the first ones to ever see this transformation!!!” 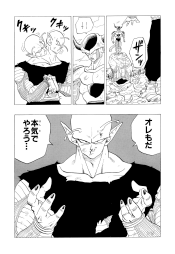 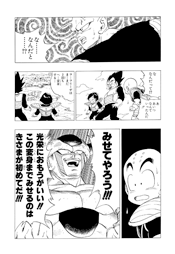