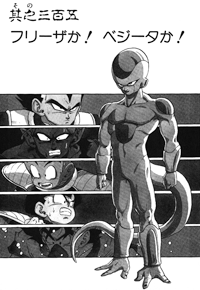 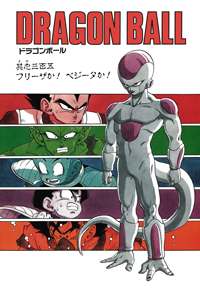 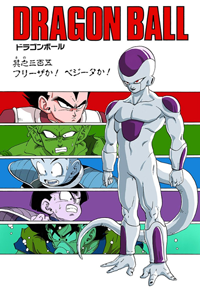 Gohan can’t believe Dende’s been killed, as Piccolo realizes Freeza must’ve seen Dende healing them. Goku notices someone has died, and that Vegeta has gotten even stronger. He wishes he knew more about what was going on. Freeza then suddenly disappears, and reappears right next to Piccolo, Gohan, and Kuririn. “I promised, didn’t I? That I’d show you a terror greater than Hell.” Gohan punches at him, Kuririn kicks at him, and Piccolo swipes at him, but Freeza easily dodges all of them. Gohan and Kuririn keep attempting punches and kicks, as Piccolo takes to the air and fires a blast down, but Freeza jumps over the blast. Kuririn and Gohan then fire blasts up at him, but Freeza disappears. Vegeta yells over that Freeza’s behind them, and Freeza says that’s right. Then Freeza shoots two finger blasts at Gohan, and Vegeta yells “Get outta the way you idiot!!!”, as he kicks Gohan out of the line of fire. There’s suddenly a huge explosion as the blasts hit a nearby island.

Piccolo, Kuririn, and Gohan can’t believe that, with Kuririn saying once again he couldn’t see Freeza’s movements or attack. Piccolo thinks to himself that Vegeta could see it though, and wonders how Vegeta’s powered up so much. Gohan thanks Vegeta for saving him, but Vegeta says not to be mistaken, he just wants to show them something good. Piccolo asks if he thinks he can beat Freeza, and Vegeta supposes so. Vegeta tells them they’re in the way, and they should get back and watch. Freeza tells Vegeta his self-confidence is great, or wonders if he didn’t lose his mind. Vegeta tells him “You can laugh like that now…! But right here is the thing you fear the most, a Super Saiyan.” At first Freeza gets worried, but then laughs and says Vegeta is joking, as usual. The others wonder about this Super Saiyan stuff, as Vegeta flies at Freeza saying Kakarrot won’t get a turn. Freeza suddenly disappears as Vegeta strikes at him, and from a distance away, Freeza laughs and wonders if he is even really a Super Saiyan. Vegeta is shocked as he can’t believe how fast Freeza has gotten. 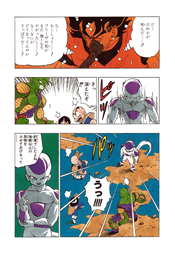 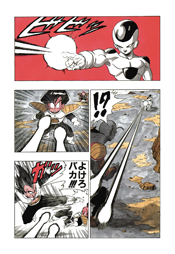 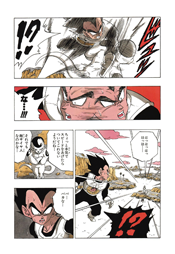