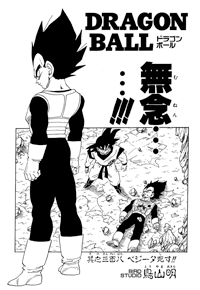 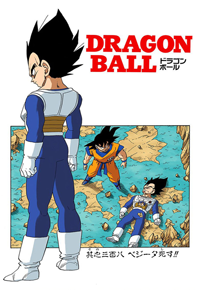 Goku says that Vegeta already could barely move, so there was no need to finish him off. Freeza just says that Vegeta’s always fussing over this stupid Super Saiyan business, and he hates rambling people. “K-Kakarrot… You’re still saying such damned naive things… You’re not a Super Saiyan… You stupid ass…! Become heartless…! If you get rid of your naiveté… you should definitely become… a Super Saiyan…!” Goku says he can’t be heartless like Vegeta, and he doesn’t know anything about this Super Saiyan stuff. Vegeta tries to explain, but Goku tells him not to talk anymore, or he’ll just die sooner. “L-listen up, Kakarrot… The planet you and I were born on… When Planet Vegeta was destroyed… It wasn’t because of a collision with a giant meteor… Freeza attacked it…! Even though we had worked under him and obeyed his every command… He killed everyone except us… Your parents, my father, the king… He was afraid that a Super Saiyan might be born… I’m begging you, defeat Freeza… With a Saiyan’s hand…” Then Vegeta finally dies, and Freeza says he wants to get the show started.

Goku thinks this must be pretty bad, if Vegeta cried and begged of him. Goku blasts a hole in the ground to bury Vegeta in. “I understand… You regretted that your fellow Saiyans were killed, didn’t ya…? It seemed you were being nice to him, but you were regretting it and couldn’t help it I guess…? I really didn’t like you, but you had pride for the Saiyans… I could have that pride flowing through me a bit, too… I’m a Saiyan who grew up on Earth! On behalf of the Saiyans you killed, and on behalf of the Namekians here, I will defeat you!!!” Freeza thinks he’s talking all stupid, as Piccolo tells Kuririn and Gohan they all need to move. As Gohan flies away, he tells his father not to die and to defeat Freeza.

Goku suddenly rushes at Freeza, and Freeza blocks his punch. Freeza punches at Goku, but Goku dodges it and punches at Freeza, but Freeza ducks it. Freeza kicks at Goku, and Goku flies backwards up into the air, then Freeza shoots some eye lasers at him. But Goku disappears and reappears behind Freeza, and chops at him, but then Freeza disappears. Goku turns around as Freeza flies up out of the water and fires a blast at Goku. He stands to catch it, and gets pushed backwards through a mountain before he finally stops and throws the blast up into the air. Goku notes that really hurt his hands, as Freeza merely stands there looking irritated. 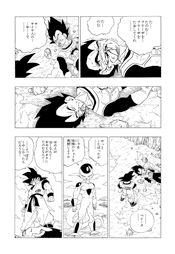 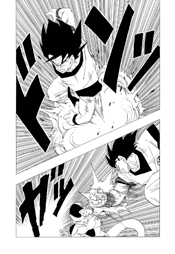 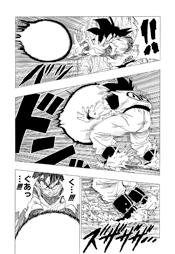