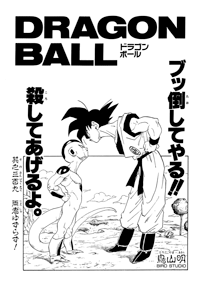 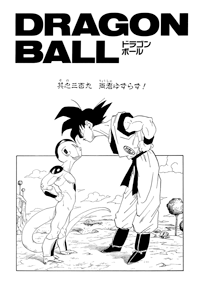 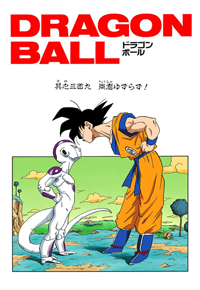 Neither Gives an Inch!

On Kaiō’s planet, Yamcha wants to know what’s going on with everyone on Planet Namek. Kaiō says Vegeta was just killed by Freeza, and Yamcha can’t believe it. Tenshinhan asks about Son Goku, and Kaiō tells him he’s just started fighting. Yamcha starts to get pissed, but Kaiō thinks it’ll be a good match. He says those Saiyans are mysterious fellows, or maybe it’s just Goku. He continues that Goku’s strength has no limits, and he seems to be a completely different person from when he was training here. Meanwhile, Freeza and Goku are staring each other down. Freeza says he’s stronger than he thought, and he’s a bit surprised there was someone stronger than Captain Ginyu on this planet. But Freeza doesn’t care, and Goku says he doesn’t understand. Freeza understands, and then suddenly causes the mountain Goku is standing on to explode with a kiai.

Goku appears above Freeza (who is mid-air), and announces his counter. He suddenly sends Freeza flying down toward the water with his own kiai, but notices there’s no splash. Freeza reappears behind Goku, and kicks Goku down into the water. Freeza wants him to hurry up and resurface, but Goku stands underwater thinking. “That bastard also has ridiculous speed… So, what do I do? It seems he can’t sense his opponent’s location by just their ki like we can… He’s always searching with his eyes… Alright! I’ll use that…” Kuririn wonders why Goku still hasn’t come up, but Gohan thinks it’s alright, since his ki hasn’t decreased at all.

Goku shoots out two small Kamehameha balls, and then maneuvers one to shoot up out of the water toward Freeza. Freeza notices it’s not him and dodges it, then dodges the second one, but Goku flies down toward Freeza from above with a kick, sending Freeza crashing down into an island. Goku thinks it was a big success, but then Freeza gets out of the rubble, and cracks his neck. Goku says, “Huh… That didn’t affect him at all…” 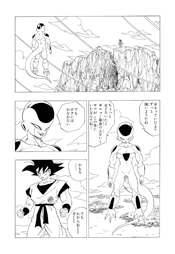 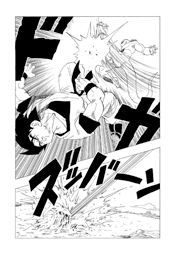