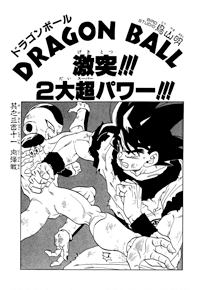 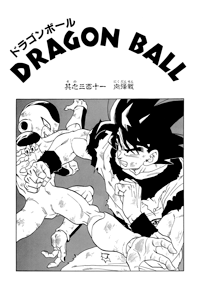 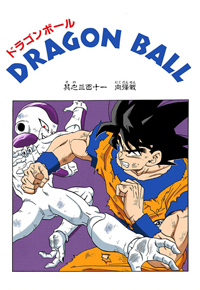 Freeza asks Goku whether he’d prefer a mid-air battle or a ground battle, and Goku says ground. Freeza chooses an island, and the two fly over to it. Goku thinks this is a nice service, as he takes off his dōgi, or wonders if Freeza isn’t just a patient person. Freeza says he’s a kind person, and decides to give Goku one more great service – he won’t use either of his hands. Goku thinks that’s pretty generous as he stretches, and then asks which of them will start. Freeza tells him to do as he likes. Goku charges at Freeza and punches at him, but Freeza jumps over it and kicks Goku. Goku dodges another kick and starts kicking at Freeza, but Freeza dodges and hits Goku with his tail, sending him flying. But then Goku comes back and grabs Freeza by the tail, and starts swinging him around, until he finally lets go and Freeza flies into a mountain.

Freeza comes out of the rubble and tries to hit Goku, but Goku blocks everything and punches Freeza in the face. Then Goku blocks another kick, and Freeza tries to hold off kicks from Goku. Goku blocks one more kick, until Freeza finally wraps his tail around Goku’s neck. But then Goku bites Freeza’s tail, and follows it up with some kicks and punches. Finally, Freeza punches Goku in the face. “Didn’t you say you weren’t gonna use your hands?” Freeza says the service period is over, and Goku thinks he should give Freeza some advice as a service. “You have too much confidence in your strength. Because of that, you leave yourself open too much.” Freeza weakly says thanks. 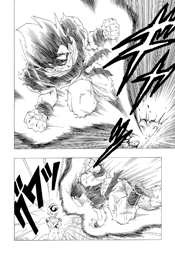 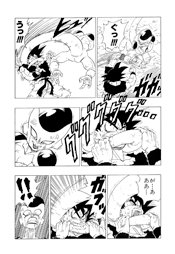 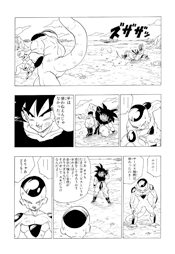