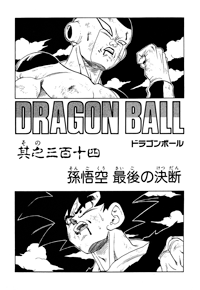 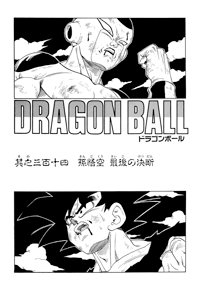 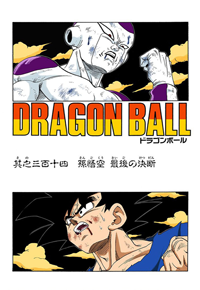 Goku can’t believe Freeza wasn’t affected, and thinks he really must be telling the truth and is only using half of his power. Meanwhile, Bulma wonders about the ground shaking, thinking it could be the sound of Gohan and everyone getting destroyed. But then she wonders if Goku has arrived yet, and hopes he gets here soon to beat up Freeza. Back at the battlefield, Kuririn can’t believe Goku’s tremendous Kamehameha barely damaged Freeza at all. Gohan says Father’s ki is decreasing quickly, and Piccolo says it’s all over, remembering what Kaiō said about “hands off Freeza”. Freeza looks down at Goku, and thinks that was a close call just now. Freeza looks at himself all scratched up, and gets pissed as he touches down near Goku who is completely exhausted. Freeza yells, “That hurt… it hurt!!!!!”, and flies at Goku, head-butting him and sending him flying.

Freeza walks over to Goku and kicks him up into the air, then flies up and knocks Goku back into the ground. Freeza then walks over toward him and asks what happened to all that strength of his, wondering if he’s used up all of his power. Goku thinks to himself that his power has completely run out, and how a 20x Kaiō-Ken was futile after all. Freeza swipes his hand, creating a huge fissure between himself and Goku. Gohan says he can’t take this anymore, but Piccolo tells him Goku is planning something. Freeza gets a surprised look on his face, as Goku puts his hands into the air. Kuririn realizes it’s the Genki-Dama, telling Piccolo it’s something he learned from Kaiō. “It’s an attack that gathers genki from all living things to create an energy ball.” Piccolo says that damn Kaiō never told him and the others anything about any Genki-Dama. Gohan says there’s not much life on this planet, but Kuririn says there’s not much other choice. Goku wishes for not just Namek, but all the nearby planets to lend him some genki. Freeza wonders what he’s doing, as Gohan and Kuririn notice the huge Genki-Dama forming in the sky. 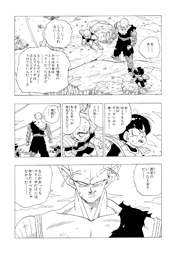 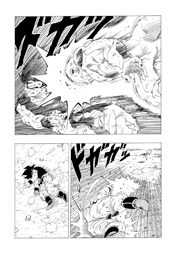 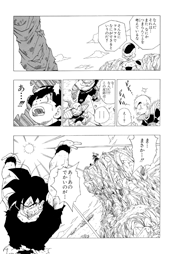