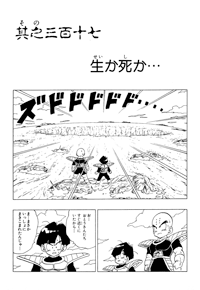 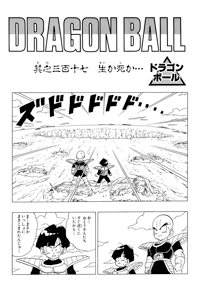 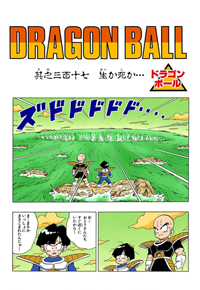 Gohan wonders if the two of them weren’t swallowed up along with Freeza, as he can’t feel their ki. But Kuririn says that’s just because they’ve used up all of their own strength too, so they can’t fell them. But then Gohan spots something. Piccolo is surfacing on another little island nearby, and he’s dragged up Goku with him. Kuririn and Gohan get excited and fly over to them, but they can’t fly fast, having used up almost all of their ki. It’s a happy little reunion, and Goku says they could all be home in five days on the spaceship he came there in. Then Kuririn freaks out, and Goku asks what. “I’d completely forgotten about Bulma-san!!” Goku says not to scare him like that; he’d thought it was Freeza again. Kuririn thinks Bulma-san is scarier than Freeza sometimes. Goku laughs, and says not to make him laugh, his whole body hurts. Piccolo thinks Planet Namek has been through a lot too, but at least now the Eldest and everyone else can rest in peace. Kuririn wonders how he knows about the Eldest, but suddenly gets a frightened look on his face.

Freeza survived and is perched atop a nearby cliff, a bit busted up, with his left eye closed shut. Suddenly a small blast shoots through Piccolo’s chest, and he falls over. Gohan freaks out, and Goku gets pissed. Freeza asks if they really thought he could die, as Goku tells everyone to get away, go find his spaceship, take Bulma, and leave the planet. Kuririn asks what he’s thinking, but Goku tells them to get out of there quickly unless they want to die. Freeza says he’s not going to let them get away with this and telekinetically lifts Kuririn into the air, as Goku yells at him to stop. Kuririn screams “Gokuuuuuuuuuu!!!!!”, as he explodes mid-air. Freeza laughs and asks if the brat should be next. But Goku says, “You won’t get away with this… How dare you… How dare you…” Goku’s hair suddenly turns blonde, and his whole body is glowing. He tells Gohan to take Piccolo back to Earth, since he’s just barely alive. Gohan hesitates, so Goku yells (in very non-Goku speech), “Hurry up and get outta here while I still have a bit of sense left!!!” Gohan obeys, as Goku stares down Freeza. 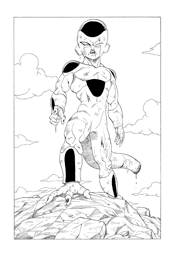 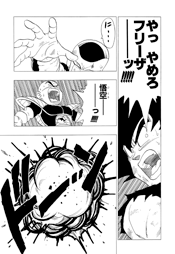 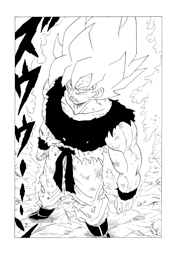