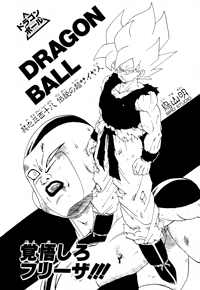 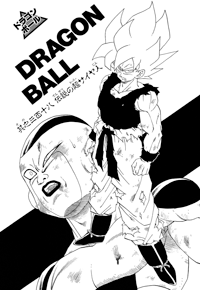 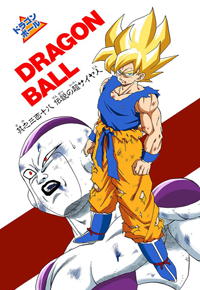 Freeza wonders about his different form, saying he’d thought that Saiyans could only change into Ōzaru. Goku yells at Gohan to hurry up, because if Piccolo dies, God dies as well, and assures him that he’ll return to Earth later. Gohan asks how, and Goku yells at him to stop talking stupid. Gohan carries Piccolo over his shoulders and flies away, saying, “Thank you, Father. Thank you.” Freeza prepares to attack them, but Goku instantly appears next to Freeza and grabs his wrist. He says that Freeza keeps trying to kill one innocent person after another, even Kuririn was innocent. Freeza breaks free from his grip, then backs off and wonders where he got such power. Meanwhile, Gohan says he understands. “What Vegeta said was true… Father was able to become one after all… A Super Saiyan!!”

Goku yells that he’s super pissed now and flies over toward Freeza, punching him in the face, which sends him flying. Goku follows and pounds Freeza down into the ground. But Freeza recovers from the rubble, and joins Goku mid-air, asking if the Saiyans were also free of crimes. Goku asks, “So you did destroy them…”, and Freeza says he did since he didn’t like them. Goku says, “This time, I’ll destroy you.” Freeza laughs at this, and says there’s no way he can win, even if he really has become a Super Saiyan. Then Freeza blasts Goku, following it up with a bunch of larger blasts. But when the smoke clears, Goku is unscathed, with his clothes just a bit more tattered. “Even if you apologize, I won’t forgive you.” Then Goku hits Freeza with a kiai, but Freeza manages to catch himself. As Freeza catches his breath, Goku simply smirks. 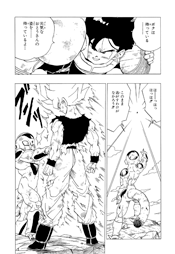 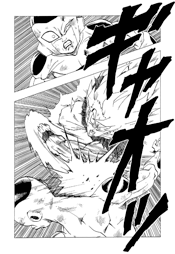 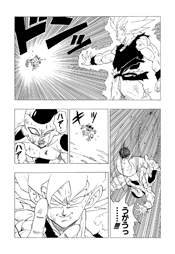