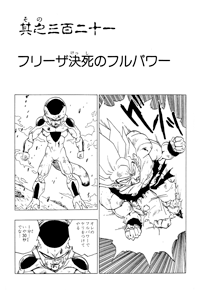 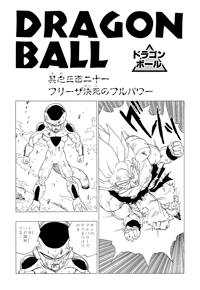 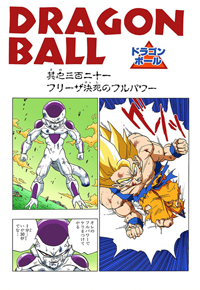 Freeza thinks he’ll kill him with his full power, in about one minute… no, thirty seconds. Then Freeza starts bulking up, and Goku says his ki is approaching fullness, and finally his 100% power will surface. Meanwhile, Kaiō screams that now’s Goku’s chance to attack Freeza while he’s powering up, and asks if Goku hears him since he isn’t doing anything. Goku says he hears, but he doesn’t think he’ll ever get another chance like this — the chance to see the strongest bastard in the universe at full power. Kaiō can’t believe Goku is talking like this, and says this isn’t a game. “I’ll get revenge for Kuririn!!! He’s died twice!!! He can’t be returned to life with the Dragon Balls anymore!!! Kuririn was a good guy… A really good guy… My best comrade… Blown to pieces…” Kaiō says that’s why he shouldn’t wait for Freeza to reach his full power, and besides, what about Gohan and everyone. Goku says they’re taken care of.

85%… 90%… Goku says how he’d wanted to beat Freeza while he’s at his best, and figures Freeza also wanted to see it himself. Freeza just laughs softly. Kaiō says, “That is no longer Son Goku… It’s the warrior of anger… a Super Saiyan…” Elsewhere, Gohan is flying through the air, wondering what’s happening with the planet, and why Freeza’s ki is getting larger. He approaches Bulma’s location, and arrives just in time to save her from the path of a huge boulder about to fall on her. As they fly off, Bulma berates him for leaving her there all this time, and asks about the earthquakes and the whereabouts of Goku. But Gohan says he’ll explain later, they have to hurry now, and Bulma asks where they need to hurry off to. Meanwhile, Freeza is finally finished powering up and apologizes for the delay. Goku realizes he needs to hurry and finish this.

“Kaiō, Kaiō! This is the God of Earth…” Kaiō says he hears him, and asks what he wants now. “Ah, right! I have received word from Mister Popo that he has found all of the Dragon Balls. So we’ll bring Tenshinhan and Yamcha, who are at your place, back to life right away… But I’m sorry to say there’s nothing more we can do for Chiaotzu…” Kaiō remembers that someone can’t die twice and come back. Tenshinhan tells Chiaotzu not to worry because he’ll stay there too, so they’ll always be together. But then Kaiō yells at God to wait, and asks if those Dragon Balls can revive two people at once. “Eh? Y-yes, if it’s the same circumstances… Like this time for example, please return to life those killed by Vegeta and Nappa… If you ask like that, you can do any amount of people…”

Kaiō notes that you can only make one wish at a time with those Dragon Balls, though. But then he asks if you could have a wish granted on a planet far away from Earth. “Y-yeah, maybe… Why do you ask a thing like that? Is it that you intend to return to life all the aliens that Vegeta and Nappa have killed in the past? Of course that should be possible, but as for its effectiveness, it’s limited to those who’ve died within one year.” Then Kaiō asks about people who’ve died due to their life span. “Unfortunately, that is impossible, natural deaths are…” Kaiō asks what if their life span was shortened a bit from meeting a bad person. God says this would be the first case. Now Kaiō says there’s a different wish they should make: “Return to life those killed by Freeza and his gang.” He says there’s no time to explain, but it might possibly return the Eldest back to life. And only two of Porunga’s three wishes had been used, so if the Eldest is returned to life, there should be one wish left still, and they’ll use it to teleport everyone on Planet Namek, except Freeza, to Earth.

Yamcha, Chiaotzu, and Tenshinhan all say it’s okay to forfeit their revival. So Kaiō tells God to hurry up, Planet Namek is fading away, so God says he’ll get on it right away. Elsewhere, Freeza punches Goku in the gut, then grabs him by the head and kicks him in the face. Then he hits Goku a few more times, and says this has just been a warm up for his ultimate attack. But then Goku looks up and says he’s disappointed. Freeza gets pissed, but then smirks and compliments the magnificent strength of the Super Saiyan. Elsewhere, Mister Popo has summoned Shenlong! 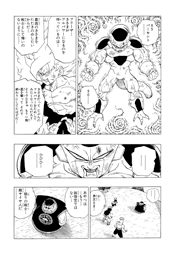 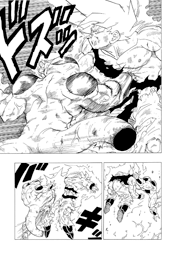 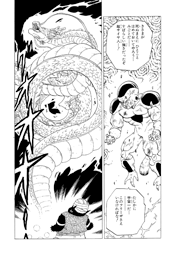