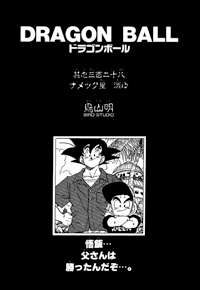 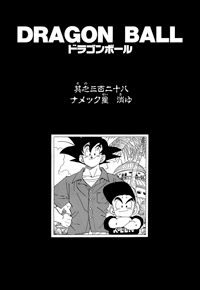 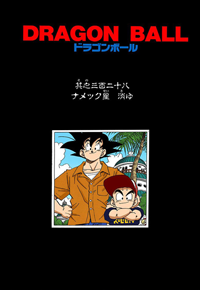 Kaiō explains to Yamcha and everyone that Freeza is dead. Son Goku gave him some of his own ki, but he used it to attack him, so Son Goku reluctantly finished him off. Yamcha gets excited, and Tenshinhan figures Goku must be the strongest in the universe now. But Kaiō says only the strongest for a moment because Planet Namek is about to explode, and Goku has no time to reach his own ship so he’ll have to use Freeza’s nearby ship, but it’s broken. Yamcha counters that this is Goku, he can get through any pinch, especially now that he’s a Super Saiyan.

Goku reaches Freeza’s ship, and runs through it until he gets to the control room. “Alright, great. This is almost the same as the ship I came here in!! This one!!” He presses the button, but nothing happens. “C’mon, move!!! Please move!!! Move, damnit!!!” But then the ship starts sinking into the ground, so Goku gets out and heads into the air again. Kaiō tells everyone that Freeza’s spaceship wouldn’t fly at all. Goku says the planet is exploding, and then screams, “SHIIIIIIIIIIT!!!!” Kaiō can’t watch anymore, and Yamcha tells Goku not to die. And then… boom! Planet Namek is gone. Kaiō solemnly says it was hopeless after all. He thinks it will be hard to tell Goku’s son, but Yamcha asks to please allow him to tell him.

Yamcha puts his hand on Kaiō’s shoulder, and begins speaking to Bulma. He explains that he’s speaking to her heart through Kaiō. Bulma asks if he’s healthy, and Yamcha says he’s as healthy as can be, for a dead person. But he needs her to listen, it’s about Goku. Goku defeated Freeza… Bulma interrupts and tells everyone else there, and Vegeta can’t believe Kakarrot defeated Freeza. But that’s not all, Yamcha says. He didn’t make it off Planet Namek before it exploded, and he has died. Bulma loudly says that Goku died when the planet exploded. Gohan hears that his father didn’t escape, and Yamcha yells at her about being so blunt like that and not thinking of Gohan.

Bulma tells Yamcha he doesn’t know anything. Planet Namek’s Dragon Balls came to Earth along with its people, and those Dragon Balls can return people to life multiple times. So, Goku, Kuririn, and Chiaotzu can all be returned to life. But Kaiō says she’s the one who doesn’t know anything. Chiaotzu is here, so he can come back to life, but Goku and Kuririn would return to life on Planet Namek. But, Planet Namek is no more, so they’d come back to life in space, and just die again right away. Kaiō can’t do anything about that, either, because Namek is out of his domain. Bulma is shocked… 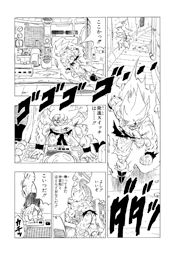 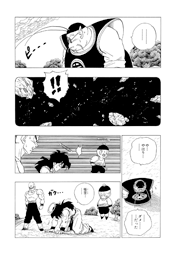 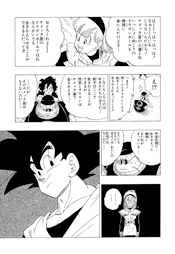