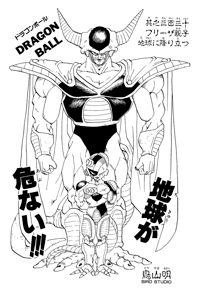 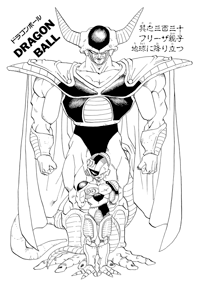 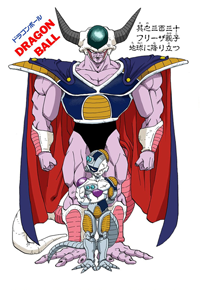 Freeza and his Father Descend to Earth

Gohan flies through the air, wondering why such a thing is happening, and then he catches up to Kuririn. He asks Kuririn if he’s also noticed that there’s another large ki just like Freeza. Kuririn says, “How could he not have noticed?” Out in space, someone tells King Cold and Freeza that they’ll soon be touching down on Earth. Vegeta, out in an empty desert area with Yamcha, says this is around the spot they’ll be landing. Then they spot a little jetcopter coming toward them; it’s Bulma with Pu’er. Yamcha asks what they’re doing here, and Bulma wants to see Freeza, since she didn’t see him once on Planet Namek. Yamcha says it’s really dangerous, but that’s exactly why she wants to see him. She notes that he’ll probably blow up the Earth, so it doesn’t matter where she is anyway.

Tenshinhan and Chiaotzu then arrive, and Tenshinhan is pissed that Vegeta is still on Earth. Vegeta thinks he wants to say something, and Tenshinhan says, “What I want to say is, I think you’re rotten… Anyhow, I was killed by you. I can’t see how Yamcha can live with you.” Yamcha says this isn’t the place for that, and Tenshinhan asks if this is really Freeza. Vegeta yells at them to hide their battle powers before they start talking, because they’ll have scouters. Vegeta also says that the Namekian is already doing that, and everyone spots Piccolo standing nearby. Then Gohan and Kuririn fly in, and see everyone is there. And then Freeza’s ship starts coming in, and lands a short ways away.

It’s definitely Freeza and one other person, and Vegeta yells that they’ll have to walk so as not to be noticed by their scouters. Yamcha is hesitant, having noticed how ridiculously huge his ki is. Tenshinhan can’t believe they fought someone like that. Yamcha says there’s nothing they could do even if they went over there, against two unbelievable people like that. Piccolo asks what should they do instead, stay here and rot? Everyone knows there’s nothing they can do. Vegeta decides to put it bluntly — this is the end for the Earth.

Freeza has stepped out of his spaceship, along with his father and a bunch of their henchmen. King Cold says it’ll be three hours before the Super Saiyan returns, and asks if Freeza wants to wait. Freeza says of course. But he’ll make him regret it, and kill all the Earthlings before he arrives. There’s a lot of Earthlings, but three hours should be plenty of time. King Cold says to do what he wants with the Earthlings, but he must stop the Super Saiyan. Their family alone should be the strongest in the universe. Freeza says the two of them could surely defeat him, but even just himself powered up should be enough. Yamcha gets pissed that he just came back to life, and now he’s going to go die again. Freeza tells all of his men to go wipe out the Earthlings, as someone lands in front of Freeza… 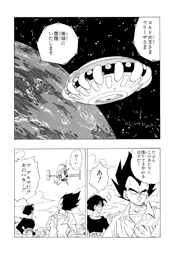 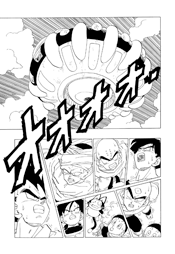 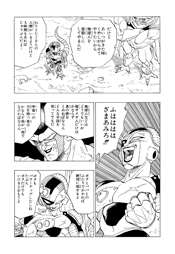