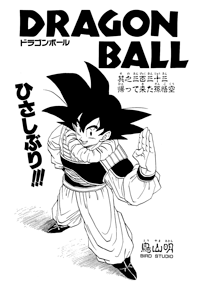 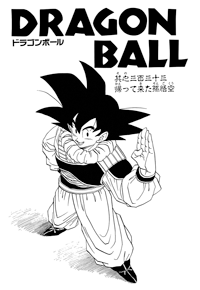 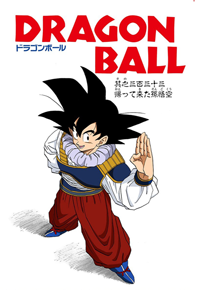 The kid then flies off, and Gohan says he’s going to go with him. Kuririn is suspicious, but Tenshinhan says he’ll go too — he defeated Freeza and knows about Son Goku, so he can’t be bad. Yamcha and Bulma wonder how he knows Goku’s coming, and Vegeta says he’s going, so he can find out who this kid really is. The kid looks at his watch, and thinks this is the spot, and lands down on the ground. Everyone else lands just afterwards, and the kid pulls out a case of capsules. He picks one and throws it out, and Yamcha says to be careful, he’s pulled out a strange thing. But the kid opens the thing up, it’s a refrigerator, and gets a drink. He says it’ll be about three hours until Son Goku arrives, and offers them drinks if they’d like. Bulma and Gohan each want one, and then Kuririn does too.

Bulma asks the kid if they’ve met before, and he says they haven’t. Gohan asks how he knows his father, and the kid says he’s only heard of him, never met him. Kuririn asks how he knows Goku’s coming in three hours, then, and the kid says, “sorry, I cannot say”. Vegeta wants to know what that’s supposed to mean, and who the hell he is, and why he has such power. “Sorry, that is also…” Gohan asked if he was a Super Saiyan before, and the kid says he was. Vegeta says to cut the crap: the only Saiyans are he and Kakarrot, known here as ‘Son Goku’, and the half-Earthling brat. Gohan is certain he was a Super Saiyan, though. Vegeta then says all Saiyans are supposed to have black hair.

Bulma then notices the Capsule Corporation mark on his jacket, and asks why he has it, is he an employee? “It isn’t that, but…” Bulma figures that’s a secret too, and asks if his name and age are also secrets. “I can’t say my name, but my age is seventeen.” Tenshinhan thinks it’s odd he can’t say his name, and Yamcha thinks he’s hiding something. Bulma says they should stop the questions and worrying. This kid saved them and the Earth. So then they all wait. But then Gohan has something to ask Piccolo — why didn’t he leave with the other Namekians? Piccolo just says it would’ve been boring.

Bulma whispers to Kuririn that Vegeta is never around during the day, and figures he’s off doing special training somewhere. Kuririn says he probably wants to defeat Goku, he has a lot of pride. Then she asks Kuririn if he thinks the mysterious kid kind of resembles Vegeta, with his disposition. Kuririn thinks she’s right, but their personalities are completely different. The kid happens to be looking at Vegeta, and Vegeta asks the why he keeps staring at him. If he really were a Saiyan, he wouldn’t think Vegeta was so unusual. The kid nervously apologizes, and Vegeta says he doesn’t like him.

Tenshinhan thinks maybe Son Goku could’ve met his kid on a planet out in space, but Chiaotzu says he seems very familiar with Earth. Tenshinhan supposes maybe the mystery will be unraveled a bit if and when Goku really gets here. Some time passes, and the kid looks at his watch and says it’s about time for him to arrive. Tenshinhan says it’s true, he feels a ki. Gohan says it’s his father’s ki. And then a space pod crashes down a short distance away. Everyone runs over to the crash site, and down in the bottom of the crater is the space pod, and out pops Goku in a really weird outfit. He wonders why they’re here, and everyone is excited to see him. Bulma says this kid told them, and Goku asks who he is. 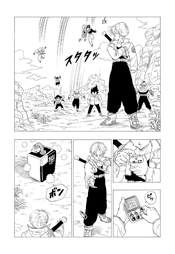 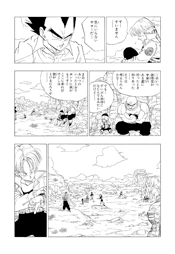 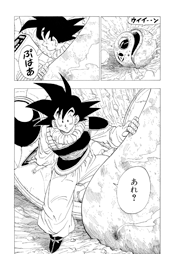