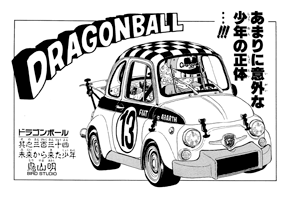 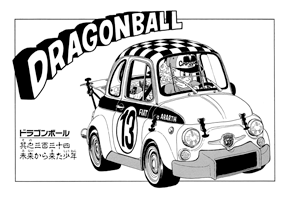 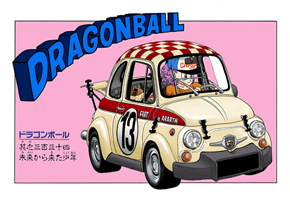 The Boy From the Future

Goku says he doesn’t know him at all, but Bulma says he knew the time and place he’d come. Goku thinks that’s odd, and says Freeza found his ship and seemed to know when he’d reach Earth. Speaking of which, Goku asks who defeated Freeza. Was it Piccolo, or maybe Vegeta? Piccolo says it was the kid, he can also become a Super Saiyan. Goku is surprised, and then says that’s awesome, he’s so young, and he didn’t know there were any other Saiyans. Vegeta says there aren’t. Goku says it doesn’t matter, he’s a Super Saiyan, and Bulma thinks Goku’s as nonchalant as always. Then the kid tells Son he wants to speak with him, and they walk a distance away from everyone else.

First Goku thanks him for defeating Freeza, and thinks he was naive on Planet Namek. The kid says he was supposed to have defeated Freeza, but there was a time discrepancy, so he stepped in. Goku says Freeza’s spaceship was way ahead of him, and he would’ve beaten Freeza if not for the kid appearing. The kid says he couldn’t have, he was three hours away, but Goku says he has a new technique: Teleportation. He learned it from the people on a planet called Yardrat. The kid realizes he’s changed history for nothing, and ended up meeting everyone. Goku asks what he means, and then the kid asks if he can freely become a Super Saiyan. Goku says he couldn’t at first, but he can control it now. The kid asks him to do it now, and so Goku obliges and transforms.

The others wonder what happened, and Gohan says he’s become a Super Saiyan. Now the kid turns Super Saiyan too, and Goku says they really are the same. The kid apologizes, and then pulls out his sword and heads towards Goku. But he stops just before his sword comes down on Goku, and Goku hasn’t flinched at all. The kid asks why, and Goku says he knew he didn’t intend to kill and he’d stop. The kid says he won’t stop this time, and then attacks Goku again. Goku uses his finger to counter the sword for a while, until the kid stops, puts his sword away, and de-transforms. He says Goku was great, better than the rumors. This sword had killed Freeza, but Goku knows the kid wasn’t fighting seriously. Now the kid will tell him everything, and asks to please keep it to himself, and Goku says he will. The kid says he’s come here from about twenty years in the future using a time machine. His name is Trunks. And the reason he has Saiyan blood… is because he’s the son of Vegeta. “Eh?! Vegeta’s?!” 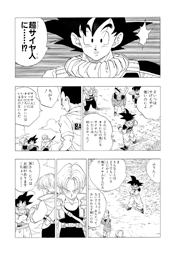 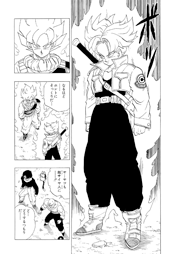 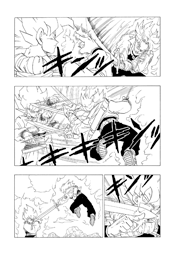