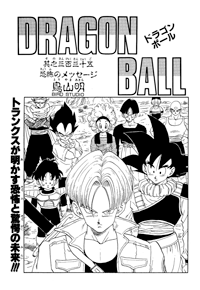 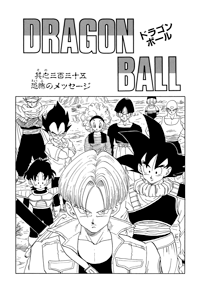 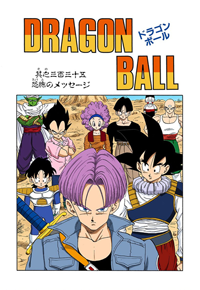 A Message of Terror

Goku asks if he’s really Vegeta’s son, and thinks he does resemble Vegeta come to think of it. Trunks says he’ll be born in about two and a half years, but that’s not what he came to tell him. He has something important to say: “Three years from now, at about 10 AM on May 12th, a fearsome duo will appear on an island nine kilometers southwest of South City. Monsters with no regard for life, and have tremendous power.” Goku asks who they are, aliens? “No, they’re artificial humans, or cyborgs, invented right here on Earth. The one who created them is Doctor Gero, a mad scientist originally of the Red Ribbon Army.” Goku is shocked to hear that. “That’s right, the army you defeated a long time ago. But it seems Doctor Gero survived and continued his research.” Goku asks why, world domination?

“I don’t really know, but at least I think that was Doctor Gero’s aim. However, he created ultimate murderous machines. Those artificial humans, No. 19 and 20, killed their parent Doctor Gero after they were born.” Goku thinks they must really be something if he, a Super Saiyan who defeated Freeza, says they’re monsters. “Yes, I’ve stood up to them, but it was no good… Anyhow, since there are two opponents, and I can’t fight them one-on-one, so I have to run away.” Goku says wait, where’s his friends? “There are none. In twenty years, I’m the only warrior remaining. The battle in three years, my father, Kuririn, Yamcha, Tenshinhan, Chiaotzu, Piccolo… Everyone is killed… Son Gohan just barely managed to survive… He taught me to fight, but then four years ago… As you know, when Piccolo dies, the Dragon Balls are also gone, so nobody could be returned to life. For years, they’ve been playing around and taking lives. Because of the Artificial Humans, my world in the future is like a living Hell. They’re strong…!! They’re too strong…!!”

Goku says wait, what happened to him? “You didn’t fight. You’ll be infected with a disease not long from now, and you’ll die. It’s a virus-natured heart disease. Not even a Super Saiyan can win against disease.” Goku figures not even senzu works, and gets angry at the thought that he dies instead of fighting. “You regret that you can’t fight? Aren’t you scared?” Goku says it’s scary, but he wants to fight strong dudes. “You really are a true Saiyan warrior. You’re just like Mom and Gohan said. You’re trustworthy, I’m glad I came.” Then Trunks pulls something out of his jacket. “When your symptoms show up, please take this. It’s medicine for you. It’s incurable in this time, but in twenty years there’s special medicine. You won’t die with this medicine.” Goku gets really excited and says thank you. “Really, I shouldn’t be doing this. Changing history. But, for that kind of history… I believe that you can surely do something. Mom also wished this, and she managed to complete the time machine.” Goku is surprised his mom knows him, and Trunks says she knows him very well, she’s right over there. “B-BULMA…!!!!!”

Vegeta is annoyed that they’re still talking, and Bulma thinks Goku looks surprised. Goku says he was really surprised by that, and thought she’d end up with Yamcha. Trunks says Yamcha was kind of fickle and dumb, so they broke up, and she noticed Vegeta seemed lonely, so… But they never got married, what with their personalities. Goku understands that. Trunks says his father died when he was too young, so this is his first time meeting him. Yamcha wonders why they’re looking over here, and Pu’er says they’re smiling a bit. Trunks asks Goku to especially keep that part a secret, because if the two of them found out, he might not be born. Then Trunks says he needs to get back to his mom, and that he has faith in Goku’s strength. Goku asks if they’ll meet again, and Trunks doesn’t know, he needs a lot of time for the time machine to get the energy for a round trip. If he’s still alive, he’ll come back in three years. Goku tells him to live, and he’ll spend the next three years training.

Trunks gives Goku a thumbs up, then flies off. Goku walks back to the others, wondering how he’ll tell them all this. Kuririn asks what that dude wanted, and Goku says nothing big. Piccolo says to tell it, it’s very important to all of them. Goku can’t believe he heard, and Piccolo says his sense of hearing is different. Piccolo then says if it’s hard for him to say, he’ll say it. Goku protests, but Piccolo says he won’t do anything to endanger the kid’s existence and say anything unnecessary, but they’ll all be killed without training. And so, Piccolo tells them everything, except about Trunks himself. Yamcha thinks that’s all crazy, coming from the future. Piccolo says they can believe what they want, but he doesn’t want to, die and will train. Then they look up and notice the time machine way up in the air, with Trunks inside. “Dad… As Mom said, you’re strong, proud, stern, and you seem to be a lonely person. Somehow or other, don’t die… Young Mom, good luck to you as well.” Trunks waves down to everyone, and then the time machine vanishes. Tenshinhan says he’ll also train, and Kuririn will too. Indignant, Vegeta thinks he’ll definitely survive in three years. 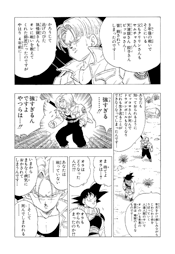 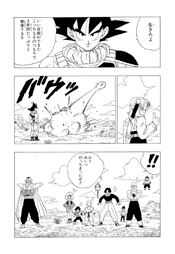 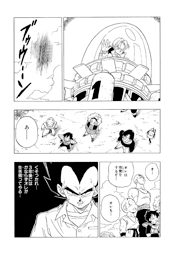