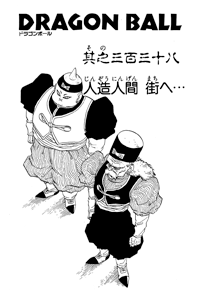 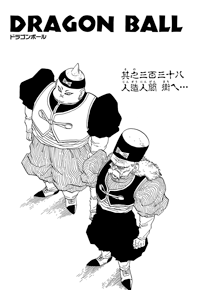 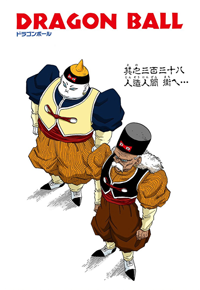 The Artificial Humans Head to the City…

Piccolo says if they can’t feel their ki, they’ll have to search for them with their eyes. Goku agrees that they should all go search, but warns them not to get too close and to let everyone know if you find them. So they fly down into the city. Goku lands on top of a building, and wishes Trunks had shown him a photograph of them or something. Kuririn is on the sidewalk wondering who they are, while some nearby guy freaks out that Kuririn was flying. Kuririn asks the guy if he’s seen anyone suspicious, and the dude says, “Yeah! You…” Piccolo and Tenshinhan have also landed, while Gohan helps Yajirobe (who crashed in the ocean) and Yamcha runs through an alley. The artificial humans are standing in the road somewhere in the city, and two guys ask them if they saw the car explode. The fat pale artificial human says nothing, and then head butts one of the guys, and punches the other. Then a car comes up and the driver yells at the old man artificial humans for standing in the middle of the road. The old man artificial human puts his fist through the hood, pulling out some wires. Then he grabs the driver by the neck, lifts him up (still by the neck) through the roof of the car, and then squeezes his neck until it pops off from the shoulders. A woman sees this and screams, which Yamcha hears it and he rushes over. The woman runs off, and the old man artificial human starts beeping.

Yamcha says this is the area where he heard the scream come from, and notices the two guys No. 19 beat up on the ground. Then he spots some people in a building window, and asks them if they saw who killed these two. They say it was two strange people, but they’re gone now. Yamcha gets pissed, but thinks he should at least call the others for now. The artificial humans are now up in the air, and No. 19 says, “No, it is not Son Goku. The data does not match. There is a 96% probability that it is the human called Yamcha.” Both of them land behind Yamcha, who is thinking maybe he shouldn’t call the others. Yamcha turns around and asks them if they’ve seen where the two murderers went. Yamcha gets a good look at them, and then realizes… No. 20 says, “It’s us.” Yamcha starts to call the others, but No. 20 puts his hand over Yamcha’s mouth, holding him up in the air. Yamcha thinks to himself that his strength is… And then, No. 20 drives his other arm straight through Yamcha’s chest, and out his back. 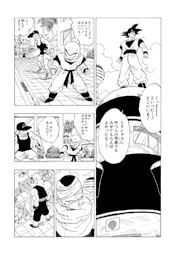 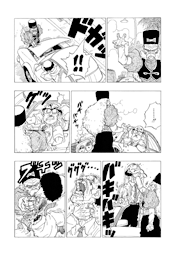 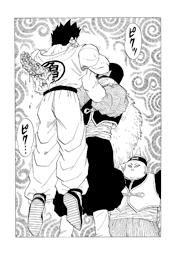