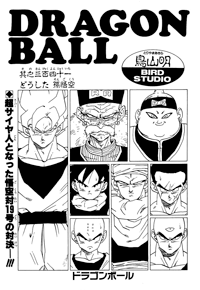 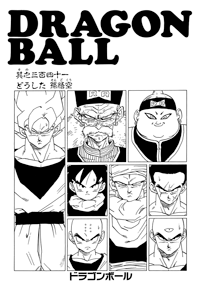 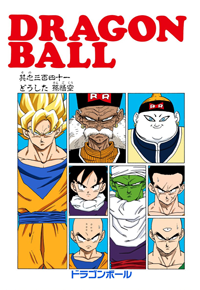 Goku rushes forward, and No. 19 puts his hand out to stop him, but Goku vanishes right in front of him. Goku then reappears behind him and elbows him, sending No. 19 flying off into some rocks. No. 19 gets out of the rubble and flies forward, but Goku puts his hand out and stops him, then he kicks No. 19 up into the air. Goku heads up into the air after him, and No. 19 dodges a punch. Goku dodges some of No. 19’s punches. No. 19 puts his hand out, but Goku blocks it, then knees No. 19 in the stomach, and elbows No. 19 in the face. Tenshinhan is amazed, thinking Super Saiyan is dimensions apart from them, and Piccolo somewhat agrees. Goku hits No. 19 hard, and No. 20 thinks this is really bad, No. 19’s energy will run out before he can take any of Goku’s power.

Yamcha, Gohan, and Kuririn touch down next to Piccolo and Tenshinhan, and Tenshinhan tells Gohan his dad is doing great. Goku hits No. 19 in the face a few times, and Yamcha thinks maybe he was wrong about energy getting absorbed. Gohan isn’t all that thrilled though. Piccolo asks him if he’s also noticed, and Gohan says yeah. Piccolo says Son Goku is for some reason rushing this fight, and already nearing full strength, but even still, his state is… Tenshinhan wonders what he’s talking about, and Piccolo says Goku’s strength as a Super Saiyan should be much greater than this. Gohan tells him about Yamcha getting his energy absorbed, and wonders if that could be the reason, and Piccolo asks about this. Yamcha says, “Yeah, he grabbed my face with his hand… Even though I wasn’t doing anything, I felt my ki being rapidly sucked away…”

Goku kicks No. 19 and sends him crashing down into the ground, but when the smoke clears No. 19 is fine. Yamcha is surprised, but Tenshinhan says artificial humans don’t seem to have pain or fatigue. Goku, however, is panting a lot, but still fires a Kamehameha down at No. 19. No. 20 gets excited, and No. 19 holds out his hand to catch the Kamehameha. He absorbs the whole thing into his hand. Yamcha realizes he was right after all, and Piccolo yells up at Goku not to fire any kind of ki blasts, because they can absorb ki with their hands. Goku is surprised to hear this, and he is panting really hard now. Kuririn wonders if he’s had that much ki stolen, but Piccolo says that can’t be. No. 20 says No. 19 is at maximum power, while Son Goku’s energy is dropping. And No. 19 rushes forward at Goku. 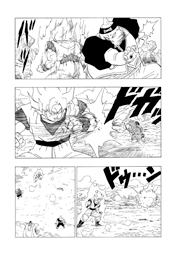 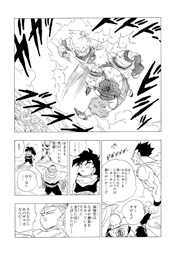 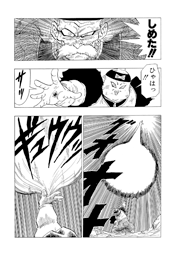