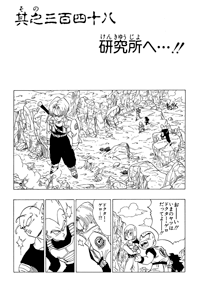 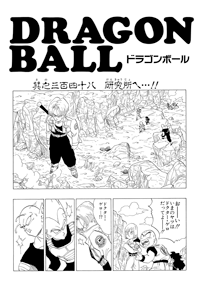 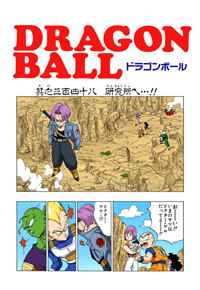 Kuririn, who’d been on the ground with Bulma and Gohan, yells up at the others that that was Doctor Gero. Vegeta, Trunks, Tenshinhan, and Piccolo all land over near Bulma, and she explains that he was really famous. He seems evil, but he is a genius. She figures he must’ve made himself into an artificial human so he could live forever. Vegeta looks at Trunks and tells him everything he said was crap, Doctor Gero was supposed to have been killed by the artificial humans. Trunks figures maybe his coming to the past before has set history off course. Piccolo wonders if No. 17 and 18 aren’t the two he originally warned them about, and asks for a description to avoid any more mistakes. “No. 17 is a boy with long black hair and a scarf around his neck… No. 18 is a cute girl-type who dresses kind of like me… They both have cold eyes and round earrings.”

Piccolo asks if they also absorb energy through their hands, but Trunks says they don’t need to, their energy is infinite. Trunks asks about Son Goku, and Kuririn says the heart disease showed up just now. Vegeta asks Bulma if she knows where Doctor Gero’s laboratory is, and she recalls hearing that he made a lab out of a cave in the mountains near North City. Piccolo thinks they should get to the laboratory and destroy it before Doctor Gero can awaken No. 17 and 18, but Vegeta won’t stand for something so cowardly. Vegeta wants to take them out himself, since the previous artificial human battles were so boring. Trunks yells that he can’t, they have to destroy the laboratory like Piccolo said. Or if they don’t make it in time, they have to wait until Son Goku heals before they can fight. Vegeta is not going to wait for Kakarrot, however, and says he’ll take them out himself, since now he’s a Super Saiyan too, and a prince that’s much stronger than Kakarrot. And he’ll allow no interference. Then Vegeta flies off.

Piccolo thinks that if he really is a Super Saiyan stronger than Goku, then maybe he could take out the artificial humans after all. Trunks says he’s a Super Saiyan also, but still no match for them. He then says he won’t let his father die again, and flies off after Vegeta. Bulma wonders what he meant by that, maybe his father was killed by the artificial humans. Piccolo figures there’s no point in keeping it from her anymore — “His name is Trunks. His father is Vegeta, his mother is you. In other words, he’s the grown up version of that baby.” Bulma thinks they do look alike, and Kuririn realizes that’s how come he’s a Super Saiyan. Piccolo says they should all search for the laboratory, and Tenshinhan, Kuririn, and Gohan agree. Bulma tells baby Trunks what a good man he’ll become, and she was worried since he looked bad.

Gohan asks Bulma if she can tell his father the situation, but Bulma asks how, since her plane is broken. Piccolo says to take her, the rest of them can destroy the laboratory without him. Piccolo, Tenshinhan, and Kuririn then fly off. Gohan grabs onto Bulma, who’s holding onto the baby, and then Yajirobe gets up to them and says not to forget him. Meanwhile, No. 20 dashes across the ground, but stops and hides when he notices Vegeta flying by, followed by Trunks. He realizes they’re headed toward his laboratory, and can’t believe they’d know where it is. Only certain scientists should know… Then he recognizes that girl as Bulma, the daughter of Capsule Corporation. Tenshinhan, Kuririn, and Piccolo then fly by, and he realizes they really must be heading for his laboratory, and figures they intend to destroy it before No. 17 and 18 awaken, but resolves to get there first.

Vegeta notices Trunks following him, and Trunks remembers something his mother said to him. “Your dead father? Hmmm… He certainly did lots of bad things… He’s undoubtedly in Hell right now… But, he had some good in him. His pride was high, and he never showed kindness to anyone, but I know…” Trunks thinks that was a lie, there’s nothing good about him at all, not even helping his mom and baby him. Vegeta thinks it’s interesting that the kid’s going to keep following him, and speeds up. Trunks then turns Super Saiyan to catch up. Vegeta smirks and remembers that he can become a Super Saiyan also, and it’s because he’s his brat that he has Saiyan blood. And Gohan tries to fly through the air holding Bulma, with Yajirobe on his back. 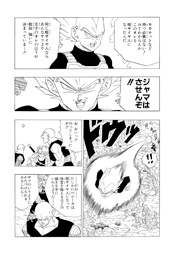 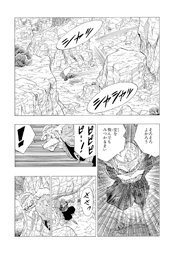 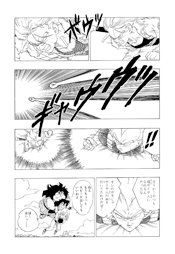