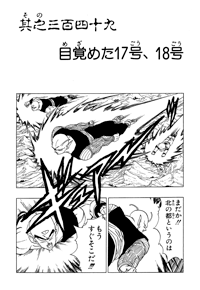 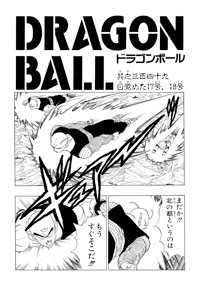 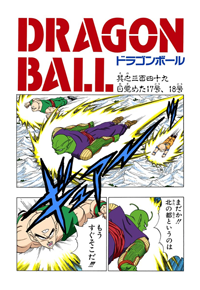 Piccolo asks if they’re at North City yet, and Tenshinhan says almost. They’re just outside the city, and Tenshinhan freaks out that there’s mountains all over the place here. Piccolo says they’ll just have to search through them, and give a signal when they find it. Kuririn says he’s cold, then asks what kind of signal to give. Piccolo says to just suddenly raise your ki. Kuririn then asks Tenshinhan if he has any money so he can buy a coat, but Tenshinhan doesn’t, and says to deal with it, he’s cold too. Piccolo thinks that’s really inconvenient for Earthlings, and says they need to hurry up before No. 17 and 18 are activated. But first Kuririn wants to give them some senzu. There’s six left, so they each get two.

Vegeta tells Trunks to go away, he’s depressing. (Neither of them are Super Saiyan now.) But Trunks says he can’t. Vegeta asks what he’ll do if they find the laboratory, fight him and destroy the artificial humans? Trunks says yes, and no matter how many times he says it, Vegeta has no idea the terror of No. 17 and 18. Vegeta says saying it like that just makes him want to fight them even more, as a pure Saiyan. No. 20 sees them above him, still down on the ground, now in a forest area. He thinks they won’t find the laboratory so easily, and then goes a little further until he reaches a cave in a mountain. He hops up to enter, but then starts beeping. Kuririn is right there, but rather hesitant. No. 20 thinks Kuririn can’t do anything (Kuririn seems to think the same), and proceeds into the cave further. There’s a huge steel door, and he opens it with some kind of access code. No. 20 tells Kuririn even if he called his friends, they wouldn’t make it in time.

Kuririn powers up nonetheless, and Piccolo, Tenshinhan, Vegeta, and Trunks all feel him. No. 20 is inside the laboratory now, with the big steal doors closed behind him. He says if possible, he hadn’t wanted to activate these two. But as it is now, there’s no choice, and they should be fixed. First he goes up to a big capsule thing with “17” on it, then unlocks it and lets No. 17 out, a boy with long black hair and a scarf around his neck indeed. No. 17 notices No. 20 holding a controller in his hand, and says “Good morning, Doctor Gero-sama.” No. 20 is surprised, and thinks that he’s fixed him well. Then he opens up the “18” one, and No. 18, a cute blond girl wearing jeans comes out. She notices the controller too then, and says “Good morning, Doctor Gero-sama. I see you’ve become an artificial human too.” No. 20 says he’d wanted eternal life.

“Frankly speaking, this is a relief. For the majority of your functions to work with the eternal energy reactor and tremendous power, there wasn’t much control before. Previously, you didn’t listen to any of my commands. Now, you’ll get to work right away. Soon, Son Goku’s little friends will be here, and you must take them all out, leave no one standing. Alright?” They both agree. They hear banging at the door, which means the good guys are here. Tenshinhan and Kuririn are trying to bust through, but Piccolo says to move so he can destroy it. No. 20 chuckles, then No. 17 suddenly snatches the controller from him. No. 17 asks if this is their Emergency Shutdown Controller, and then crushes it. No. 20 asks what the Hell is this, and No. 17 says he’s going to put him to sleep. Piccolo is about to blow the door open, and Vegeta tells him they’d better not destroy the artificial humans. They hear No. 20 say, “No. 17!! Stop the stupid jokes and go defeat the enemies on the other side of the door!!!” Kuririn freaks out, realizing the artificial humans have already been activated. 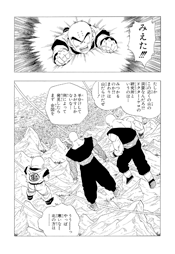 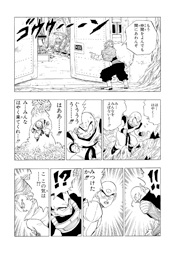 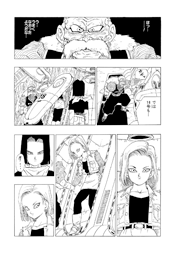