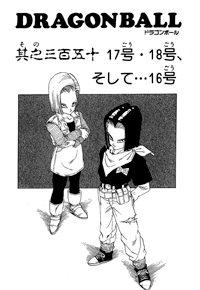 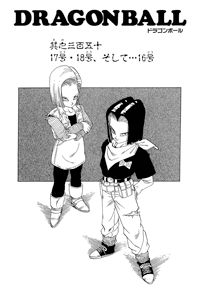 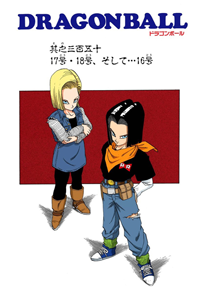 Piccolo says they’re too late, and Vegeta tells him to move out of the way, and prepares to blast down the door. Trunks objects, saying they should wait for Son Goku, but Vegeta fires anyway. The door is busted down, and they’re all face to face with the artificial humans. Vegeta asks if this is really them this time, and Trunks says yes. No. 20 says to kill them, these are the ones who killed No. 19. No. 17 is surprised to hear he made a No. 19, and has turned himself into one as well. He figures they’re energy absorption types, and No. 20 confirms as much. No. 18 wonders why he went back to the old energy absorption types, perhaps the eternal types’ power was too great that they couldn’t be controlled? No. 20 says that’s not important, just hurry up and get rid of them. No. 17 says it’s time that they do what they want. No. 18 wanders over to another capsule, “16”, and wonders if he’s an eternal type as well, although he seems like a different variety, he’s bigger. No. 20 yells at her not to touch it, and Trunks says he didn’t know about a No. 16.

No. 17 tells her to activate him, but No. 20 objects, saying the whole world will be destroyed. “No. 16 was experimental, and a failure!!! You absolutely must not activate him!!!” No. 18 wonders why he’s still here if he’s a failure, since everything up to No. 15 had been disposed of. No. 20 says he intended to fix him, but that doesn’t matter, don’t activate him, otherwise No. 16 will probably have all their necks. Kuririn wonders if this wouldn’t be a good time to run away, so Vegeta says to do what they want, none of them could handle it anyway. No. 17 asks what he means “probably have all our necks”; perhaps No. 16’s power is greater than even his (No. 17’s). But he tells No. 18 to activate him anyway, and No. 20 yells that they’re failures along with No. 16. No. 18 prepares to open it, and No. 20 screams not to press that switch.

No. 17 then puts his arm straight through No. 20’s chest, then pulls it out and kicks his head off. Twenty’s head calls them junk, and so No. 17 steps on the head. Kuririn can’t believe he’d kill his creator, but Vegeta says that’s nothing strange, he’s just killing someone he doesn’t like, same as the Saiyans would do. The strange ones are the Earthlings. No. 17 tells her to push the switch, but Trunks says he won’t allow this. Trunks suddenly turns Super Saiyan, and blasts the whole lab. Boom! The whole cave and mountain the lab had been in is gone, but Vegeta says that was pathetic. No. 17 and No. 18 are safe, along with the “16” capsule. No. 17 says to hurry and open it, since the pipe and cord are cut off. Vegeta says that was just a waste of energy. No. 18 opens it, and there is No. 16. 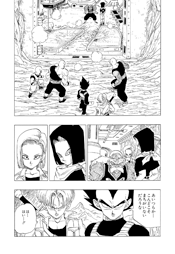 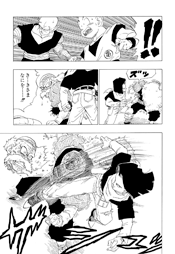 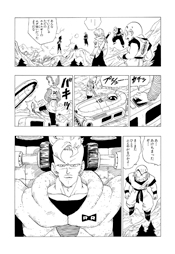