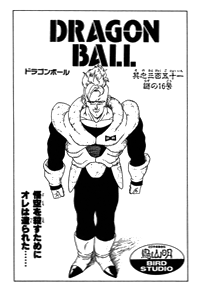 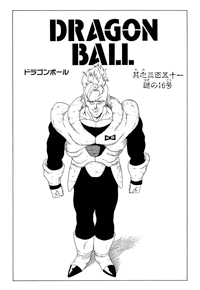 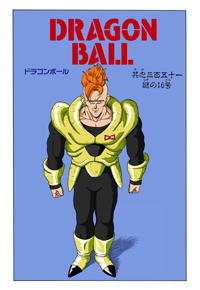 No. 16 steps out, and he’s a tall muscular type, with a bit of a Mohawk. No. 17 asks him how he feels to get out after all these years. No. 16 says nothing. No. 17 tells him what Doctor Gero said about how he shouldn’t be activated, and he’ll go after their necks. No. 18 wants to know what that means. No. 16 says nothing, then smiles. No. 17 realizes he won’t talk, or maybe he can’t talk, but it doesn’t matter. He asks No. 16 if he was also created to kill Son Goku, and No. 16 says yes. No. 17 is surprised he’s opened his mouth, and then says that even though they don’t like that Doctor Gero was the one to say it, they as artificial humans need something to do. The three of them then fly off.

Everyone is surprised, and Kuririn is glad they’re gone. Tenshinhan wonders where they went, and Piccolo says it’s not in the direction of North City. Kuririn then thinks maybe to Goku’s house, since Doctor Gero’s plan was to destroy Goku, who crushed the Red Ribbon Army. Tenshinhan says they didn’t like listening to his orders, though. Vegeta doesn’t care what they’re up to, he’s just pissed they ignored him. Vegeta turns Super Saiyan, but Trunks tell him not to go and to wait a little longer.

Vegeta wants to know if he means to wait until Kakarrot’s illness is healed, and Trunks is confused about who he’s talking about, but quickly realizes he means Goku. Trunks insists they wait for Goku because if they fight with him, then they can definitely win. Vegeta tells Trunks he misunderstands him. “The thing I hate the most isn’t the artificial humans… It’s Kakarrot…! You’ll see, I’ll take care of them by myself without his help. And lastly, the one I’ll take out will be Kakarrot… Now if you understand, move…!” Trunks thinks that’s insane, yelling that he’ll just be going to his own death.

Vegeta then hits Trunks hard in the stomach, and flies off. Meanwhile, No. 17 suddenly lands on a road out in the mountains somewhere, and No. 18 asks why they stopped. No. 17 says they’re just going for fun, so there’s no need to hurry. Not walking, but maybe they’ll find a vehicle if they keep going down this road. No. 18 thinks that’s just the kind of thing a man would like, and that he’s still a bit human. No. 17 asks No. 16 if he was also created from a human base. “No. I was created from nothing.” No. 17 is surprised he didn’t have a human base, and No. 18 says they’re fundamentally different. No. 17 thinks, “Strange… While Doctor Gero had the skill to produce artificial humans since Zero… Why did he go back to human bases like before…”

Just then, Vegeta shows up. No. 17 wonders why his aura has changed. Vegeta says it’s not just his aura, and wants to know where they’re going. No 17 says they’re going to Son Goku’s house, to kill him. Vegeta figured as much, but says that won’t happen, since he’s going to take them out right here. But they just keep grinning, and Vegeta wants to know why. No. 17 says Saiyans seem to think highly of themselves, and wonders if Son Goku’s like that too, and says Vegeta’s pride will lead him to an early death. Vegeta gets pissed at them, and wants to know which one of them will fight him. No. 18 says it’s no use, and tells No. 16 to go, she wants to see his strength. “I refuse.” Vegeta says he must be afraid, and No. 17 thinks he’s weird. No. 18 says it’s okay, and volunteers to fight. Vegeta says he doesn’t care that she’s a woman, but then, since she’s an artificial human, she’s not really a woman, is she? No. 18 just glares evilly. 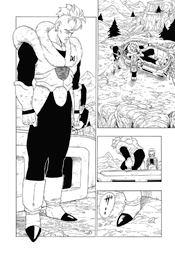 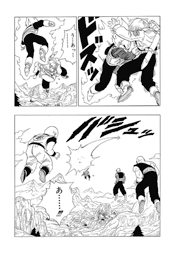 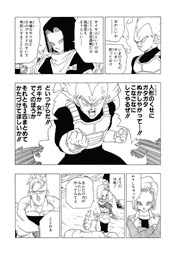