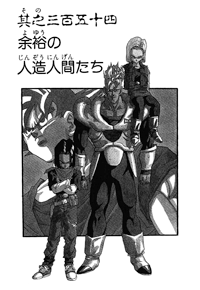 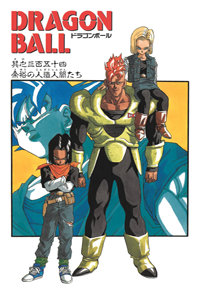 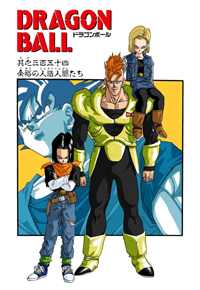 Trunks continues flying in, and No. 17 goes after him, then Piccolo and Tenshinhan follow. Trunks brings his sword down, and No. 18 puts her arm up. The sword chips from hitting her arm, and No. 17 knocks Trunks down into the ground. Then Piccolo arrives, and No. 17 hits him with a hard kick. Then he gets Tenshinhan in a headlock and starts choking him. Vegeta flies up to attack No. 17, but No. 18 grabs his foot. Trunks starts to get up, and so No. 18 swings Vegeta into him, knocking them both out. Piccolo gets up, and goes to save Tenshinhan. No. 17 throws Tenshinhan aside, and delivers a really hard blow to Piccolo’s gut. Piccolo hits the ground, and Vegeta gets up again, and tries to blast No. 18 with his good arm. But she dodges it, then hits him hard and sends him to the ground on his knees. She kicks him while he’s down, and then leaves him alone once he’s on his back. Vegeta then de-transforms out of Super Saiyan.

No. 17 notes that his hair has turned back to its original color, and the strange light is gone. And it’s the same with the other dude, who they have no data on, but it doesn’t matter. The two artificial humans fly back up to the road, where Kuririn is still standing in shock. Kuririn is scared, but No. 17 tells him not to worry, they’re still alive, so he should hurry and feed them some senzu to heal. Then No. 17 says they’re leaving, and No. 18 asks him why he won’t ask where Son Goku is. No. 17 says it’ll be more fun if they search for him themselves, and No. 18 thinks he’s really immature. No. 17 asks No. 16 what he’s looking at. “You were too noisy, so the little birds flew away.” No. 18 says there are barely any cars around here, and Kuririn is just speechless. 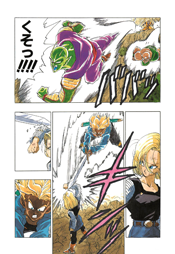 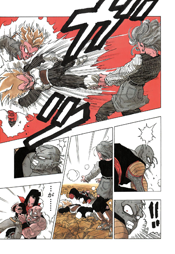 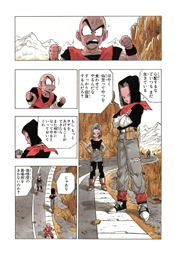