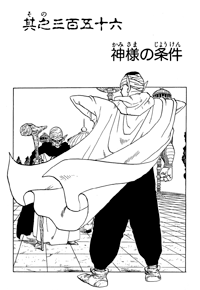 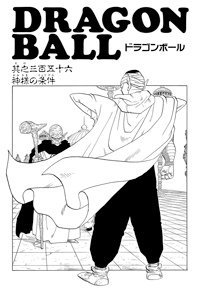 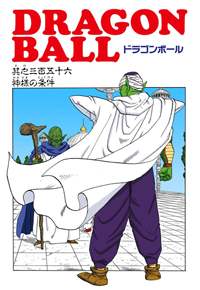 God and Piccolo stare each other down, while Mister Popo nervously looks on. Piccolo says he probably knows why he’s here, and God says he does. “Originally, you and I… No, more accurately, your parent and I were one… I know how you think… I never thought the day would come when you and I would unite once more…” Piccolo says it’s not a union, he just needs him for a super power up, and God’s only real use now is for the Dragon Balls anyway. God agrees with him, one day their difference in power just suddenly greatened, and God has been no use against any of these strong enemies. Even Trunks, who came from the future and instantly defeated Freeza and his father, and Vegeta, who is stronger than Trunks, were no match for the artificial humans. And it would probably be the same case when Son Goku recovers. “I guess the time for God and the Great Demon King to become one again has arrived…”

The artificial humans are flying along, and finally spot a car down at a little truck stop. Two delivery truck drivers (for “Lucky Foods”) are getting coffee, while No. 17 looks in the back of the truck (more like a van, actually) and says the cargo’s in the way. The two drivers wonder what’s up, as No. 16 tips the van over and dumps all the cargo out. Then the three of them get in the van, No. 16 in the back where the cargo was, No. 17 in the driver’s seat, and No. 18 in the passenger’s seat. No. 17 says they’ll go to Son Goku’s house now, but No. 18 protests and says she wants some new clothes first. They drive off, and the drivers are left in shock.

Tenshinhan, Kuririn, and Trunks are flying along, and Tenshinhan says he’ll go back to Chiaotzu, he’s probably worried. Kuririn says they’ll take Goku to Muten Roshi’s, and they should be able to buy plenty of time there. Tenshinhan says to tell Goku not to do anything unreasonable, as he turns to fly in the other direction. Trunks can’t believe how much history has changed, for the artificial humans to be this strong, and more than two of them. Kuririn says that’s just how it is now. After a while they reach Goku’s house, but before they go in, Kuririn wants to asks Trunks something — are the artificial humans really that bad? Trunks says they’re incredibly cold-hearted, why? Kuririn says they just didn’t seem like they were, but Trunks tells him not to think so naively, and Kuririn thinks back about No. 18.

Kuririn knocks, and Chi-Chi throws the door open hoping it’s Gohan, hitting Kuririn in the head. Chi-Chi wonders what Kuririn wants, and Kuririn whispers to Trunks that this is Goku’s wife. Yamcha comes out, and says he’s glad to see they’re safe. Kuririn asks about Goku, and Yamcha says he’s fine, he took his medicine and now he’s sleeping, and then wonders why the future kid is here. Kuririn says they’ll explain later, but for now, they must move to Muten Roshi’s. There are three terrible artificial humans on their way here. So, Yamcha, Chi-Chi, Kuririn, and Trunks pack some things and carry Goku into a capsule plane, and decide to wait for Gohan before they leave. Gohan finally arrives, and wonders what’s going on. Kuririn says they’ll explain on the way, for now just get in the plane. 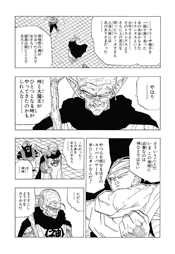 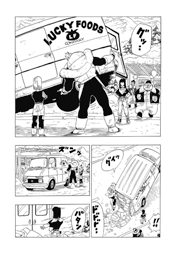 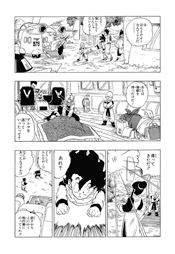