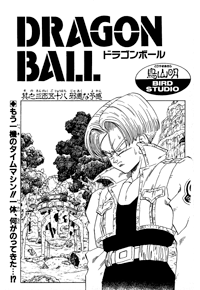 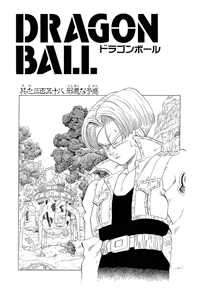 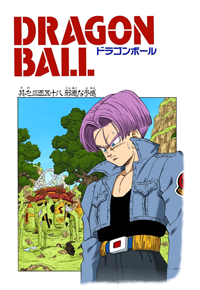 A Premonition of Evil

Trunks says this is no mistake, that’s definitely his time machine, but wonders what it means. Kuririn asks if she knows where this photo was taken, and Bulma says not really, but it’s somewhere in the West 1050 District, then asks if they’re going. Trunks is, he wants to see it with his own eyes. Bulma says she’ll go too since it’s not far from her. Gohan says he’ll go too, and Trunks thanks him. Chi-Chi gets worried, but Gohan tells her it’s not a dangerous place, then Gohan and Trunks fly off. Bulma tells her Mom she’s leaving, and asks her to look after Trunks. Bulma’s Mom wants to know where she’s off to, and Bulma says she’s going to meet with the big Trunks. Bulma’s Mom gets a surprised look on her face (this may be the only time she’s ever actually opened her eyes). Bulma then flies off in a plane.

Flying along, Gohan asks Trunks if the artificial humans in his world were really so cruel, and Trunks says yes. The population of the world has been reduced to only tens of thousands. West City is almost completely gone, and they have to make due in a secret underground base. Gohan remembers he wants to find a weak point. Trunks says that they turned on Doctor Gero, and he said they were failures. In the end, they killed him, but Doctor Gero knew their danger, and they should be at test level. So if they’re at test level, there should be a way to stop them. He thinks there must’ve been some kind of emergency shutdown device, otherwise he wouldn’t have reactivated them. Gohan thinks he must be right, and Trunks says it’s a faint possibility. Then Trunks looks at his watch, and says this should be the area. They search around, until Gohan finds the time machine and calls Trunks over. Then Bulma arrives in her little plane, and Gohan waves her over. “Hi Trunks, it’s your beautiful mother!”

Trunks has his own time machine out now, and Bulma says that this one is clearly not his. Trunks says no, she only made one time machine in the future. This one is also the time machine he came here in. He wipes off some moss, and it has “HOPE!!” written on it, that’s what future Bulma wrote on it when he was going to leave. Gohan and Trunks float up to the glass hatch roof thing, and there’s a hole in it. Gohan thinks it looks like someone burned through it. Bulma wonders what could’ve rode in it, and Trunks wants to open the hatch. Trunks climbs inside, and there’s some kind of big weird shell in the seat, cracked in half, like a walnut shell or something. Bulma wants to see it, and thinks it’s an egg shell. Gohan wonders if the thing born from the egg created that hole. Trunks looks at the control panel, and says the energy’s almost zero. The time machine came from… Age 788. Three years after Trunks’ time, even further in the future. And it came to this time about four years ago. So it was already here for a year before Trunks first came, and Trunks wonders if the great changes to history are actually this thing’s fault.

Piccolo asks God if he’s still looking on the lower world, and thinks it’s a lame hobby. But he wants God to have his fun now, because he won’t have that ability once they’re united. God thinks about his uneasiness for the past four years, and it wasn’t because of the artificial humans after all. Even God wants to know what came back in that time machine. “For such a creature to exist on Earth, with such tremendous power, much higher than even that of the artificial humans…” Piccolo wants to know what the Hell he’s talking about. God finally says the time for him to resign and unite with Piccolo has come. Soon something awful will happen to the Earth. This is not like all of the previous crises. He has a doom-filled premonition. 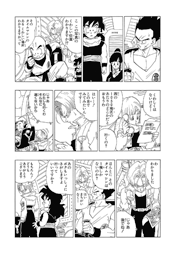 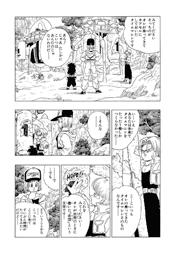 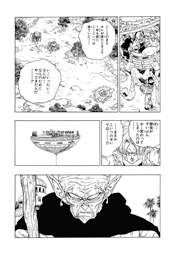