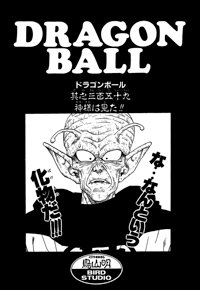 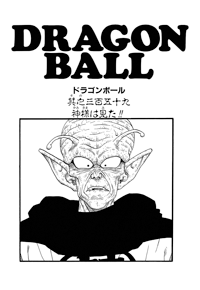 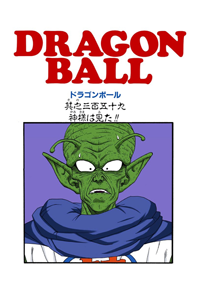 God Has Seen It!!

Trunks says there’s little that can be done aside from putting this old one back in its capsule, and Bulma says she really is a genius, building a time machine in the future. Trunks puts it away and then his newer one, and Bulma wants to take the egg shell. Gohan tells Bulma that everyone is gathering at Muten Roshi’s house, and she asks why. Gohan just says, three artificial humans have been activated, and they’re after his life, but with his father’s illness, they have to hide him. Bulma wonders why they can’t all just beat them up, but Trunks says it’s not so simple, his Dad, himself, Piccolo, and Tenshinhan couldn’t do a thing against them. Bulma is surprised, and then asks about Vegeta. Trunks says he recovered with a senzu, but then left separately from everyone else.

Gohan spots something, and then slowly starts walking over toward it. Then he stops and tells everyone to come take a look. Trunks and Bulma run over, and Gohan points to some kind of giant bug thing. They wonder if it’s dead, and Gohan looks closely, and says it’s a skin that’s been shed off. Bulma can’t believe there’d be such a huge cicada around here. Gohan says it’s not a cicada, and Trunks figures it was the contents of the egg that rode in the time machine. Gohan agrees, and now it’s grown up and shed its skin. Bulma wonders what could’ve come out, but Gohan has no idea. Trunks just wants to know how it came to this time, did someone send it, or did someone ride in the time machine with it? And still, they have no idea why it came. Trunks sticks his hand inside the skin, and there’s goo, meaning it shed its skin recently. They all look around, and Bulma says she has a bad feeling about this. Then she says they need to get out of here fast, and tells them to go to Kame House, and contact her if anything happens. Bulma tells Trunks to come visit sometime as she leaves, his grandparents would be happy. Gohan and Trunks fly off too, with Trunks wondering about things.

The stolen van is parked somewhere, and No. 18 is in getting new clothes. Right now she has some ugly cowgirl outfit, but she decides she’ll have to settle, since a hick place like this wouldn’t have anything better. Then she walks out of the store, and the salesman protests about not paying. The salesman follows her out to the van, but when he sees No. 16 through the window, he stops. But he calls the police and reports a robbery after they drive off. No. 17 teases her about her clothes, and No. 18 gets pissed and says they’ll have to find a bigger city. Then they notice the cops are after them. No. 18 opens the door, while the van is still moving, and flies back and punches through the hood of the cop car, sending it crashing into the mountain. Then she goes back to the van, and apparently the cops are still alive (barely).

God freaks out, and Piccolo asks what it is going on. God wants to know what that monster is, and Piccolo wonders what monster he’s talking about. God is speechless, and Piccolo yells at him to talk, wanting to know if this has something to do with the time machine. Bulma, in her plane, hears a man say that the scheduled program will be interrupted for a news report. About one hour ago, they lost all contact with Ginger Town, a suburb town of West City. After that, they sent an investigation team to the area, and they reported that all of the citizens have suddenly vanished. There is no trace of people at all. At present, the source of this strange and unusual situation is… Bulma says that’s near where the time machine was. 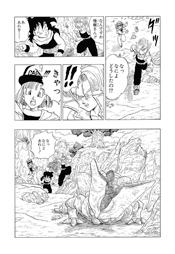 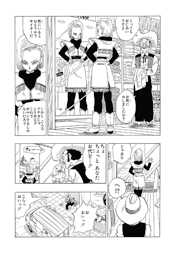 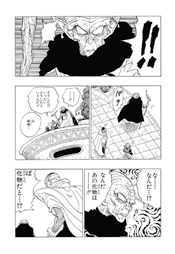