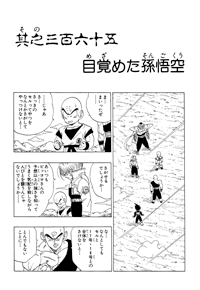 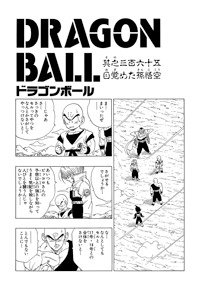 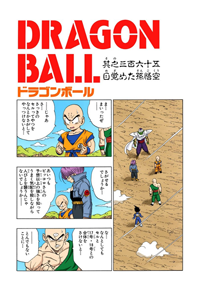 Kuririn thinks they’ll have to find Cell somehow. Trunks wonders if they can though, since Cell knows Piccolo’s strength and must be hiding his ki while he attacks people. Tenshinhan says whatever the case, they must avoid letting him combine with No. 17 and No. 18. Piccolo says it’s not just the Earth at stake, but the whole universe, since he has Freeza’s blood. Vegeta says Cell has his blood too, and he wouldn’t mind if he combined with them. The fewer opponents, the better, and no matter who he fights, he’ll kill them. Piccolo tells him he couldn’t even handle the artificial humans, there’s no way he could handle Cell if he were that much stronger. Vegeta doesn’t care, and says he’ll go further, beyond Super Saiyan. Trunks is shocked to hear this, and Vegeta says Kakarrot must be thinking the same thing too. Vegeta tells them to do as they like, and then flies off.

Piccolo wonders if it’s really possible to go beyond Super Saiyan. Kuririn figures it’d do no good to go into the past and destroy No. 17, and Trunks says yes, it would only help that dimension, and have no effect on this dimension. Kuririn then figures it’d also be pointless to go destroy the incomplete Cell in Doctor Gero’s lab, but Trunks thinks that’d be a good idea, so that another Cell isn’t born in the future of this dimension. Piccolo says the two of them should go to the laboratory, while he and Tenshinhan will search the vicinity. Kuririn tells them if they don’t find Cell, go to Kame House, they could maybe find info on the news on TV. Then Trunks and Kuririn fly off. Trunks contemplates going beyond Super Saiyan along the way.

Way up in the mountains in the north, Kuririn and Trunks look around in the wreckage, until Trunks finds the way in. A hole with a big ladder, and they hop down into it. There’s a big super computer running, and they spot the little Cell embryo in a test tube type thing. Kuririn prepares to blast everything, but Trunks says hold up, there are some blueprints. The blueprints are for No. 17, and Trunks gets excited that Mom could use this to find a weak point. Then they start destroying the whole room. They fly back out to the surface, and Kuririn throws down one final blast to finish it off. As they leave, Trunks asks Kuririn if he could take this to his mom for him, explaining that he wants to train with his dad, since he could probably go beyond Super Saiyan as well. Kuririn doubts Vegeta would let him, but Trunks figures even his dad must realize that his training would go quicker if he had a partner. And so, the two separate and fly off in different directions.

Tenshinhan suddenly feels a faint ki, and Piccolo and Tenshinhan zoom off. They come to the town, and spot all of the victims’ clothes; they’re too late. Tenshinhan figures they should hide their ki, before Cell notices them and gets away. Cell is on a rooftop, looking down on them though, and chuckles. At Capsule Corp, Kuririn has brought Bulma and Dr. Brief the blueprints, and explains everything about Cell. Dr. Brief doesn’t much understand this, and thinks Doctor Gero was really something. Bulma reads it though, noting various things. A human base, remodeled with mostly organic matter. At that cell level, fusion should be possible. She says she’ll have to take a closer look, but she thinks a small device is the weak point. Dr. Brief tells Kuririn they’ll check it out.

And so, two days have passed… Someone on the news reports that the monster has appeared in a large town in Point 48 of the South District, and half the population is already gone. Everyone is at Kame House watching, and Yamcha, Gohan, Tenshinhan, Kuririn, and Piccolo get in the plane and head to the area, so Cell doesn’t detect their ki from flying. Meanwhile, Chi-Chi heads upstairs back at Kame House, and Goku is out of bed! He says he’s healed, and then starts changing into his dōgi. He heads downstairs, surprising Kame-Sen’nin to see him up, while Chi-Chi protests that he should sleep more. Goku says he’s heard everything in his sleep, and then starts to put on his boots. Chi-Chi says he can’t fight, but Goku says he won’t fight, yet. If Vegeta couldn’t win, then neither could he. So he’s going to aim even higher, beyond Super Saiyan. 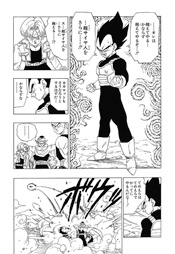 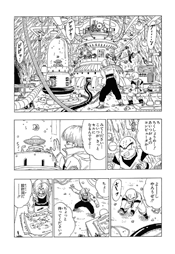 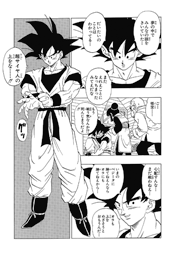