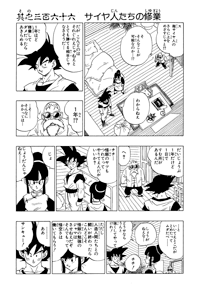 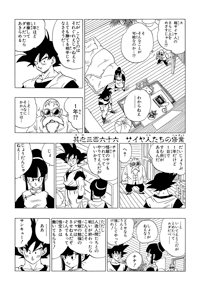 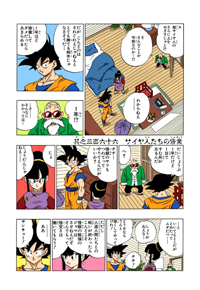 Kame-Sen’nin wonders if that’s really possible to go even higher than Super Saiyan, and Goku doesn’t know for sure. But that’s what he’ll have to do, and he’ll need a year of training for it. Kame-Sen’nin freaks out, but Goku says he knows somewhere where a year is only one day. Goku asks if it’s okay to take Gohan too. Chi-Chi says no way, or at least that’s what she wants to say, but she knows it’s no good. But after the fight with the artificial humans is over, nothing gets in the way of Gohan’s studies and Goku has to start working. Goku thanks her, then teleports away with Shunkan-Idō. He appears in the plane with Kuririn and the others, surprising them. Kuririn asks if he’s all better, and Goku says he is, except he’s pretty hungry. Then Goku says hello to “Kamiccolo-sama“, but Piccolo gets pissed and says their names haven’t joined. He can still call him Piccolo.

Goku says as it is now, he can’t win against the artificial humans or Cell. He’s going to take Gohan with him to train, in a place where you can get a year’s worth of training in a single day. Piccolo realizes he’s going to the Room of Spirit and Time, and says nobody’s ever lasted a year in there. In the past, Goku couldn’t even stay a month. Goku says he’ll bring Vegeta and Trunks too, and hopefully one of them will be able to endure it. Piccolo says they need to hurry, before Cell gets too much stronger. Before they leave, Kuririn asks Goku if he’s scared or happy to have an enemy stronger than Freeza. “Both.” Then Goku vanishes with Gohan. Tenshinhan thinks he’s an indiscreet person, even at a time like this. Kuririn says with Goku, there’s now a little bit of hope, and thinks he really could surpass Super Saiyan.

Goku and Gohan appear on a cliff, where Trunks is sitting down, and Vegeta is up ahead of him. Goku asks how the training is going, but Trunks says nothing’s happened. His dad’s just been standing there for the past three days. Goku goes over to Vegeta, and he tells Kakarrot to go away. Goku tells him not to talk like that; he knows a good place to train where you can get a year’s worth of training in one day, a room at God’s Palace. Vegeta is intrigued. Goku says the two of them don’t have to train together, but only two people can go in at a time, so Vegeta should go in with Trunks. Vegeta says alright, but he and Trunks will go in first.

The artificial humans are in Goku’s house, and No. 18 says there’s no one here. No. 17 asks No. 16 if he knows where he could be hiding, and No. 16 says the radar isn’t detecting Son Goku’s power. But, he could be staying with one of his allies, at Capsule Corporation in West City, or Muten Roshi’s small island at South Point F. No. 17 asks which is closer, and No. 16 says Muten Roshi’s, it’s about 2700 kilometers southeast from here. So, they’ll go there. Meanwhile, the Saiyans are all at God’s Palace now. Mister Popo leads them toward the room, saying all there is inside is a bath, toilet, food, and beds. Vegeta asks Kakarrot why he’s letting him go first, knowing full well that Vegeta’s greatest aim is him. Goku says this enemy is not one that can be defeated alone, and Vegeta must’ve noticed this too. Vegeta says he’ll regret that.

Mister Popo says they’re here, and asks who’ll go in first. Goku says Vegeta and Trunks, and wishes Trunks good luck. Inside, they’re in a nice little tiled room with beds and food. Trunks says it’s hot in here, the air is thin, and the gravity is pretty high. At the edge of the room, they walk out, and there’s nothing there but white space. Trunks says it’s really vast, and is amazed that Goku even lasted a month in here. Vegeta likes this, and Trunks wonders if he can really spend a year in a place like this with his dad. In the plane, Yamcha gets pissed that Cell’s lowered his ki, and Kuririn says he just hides every time. Piccolo says he’s probably gotten strong enough now, and they don’t know when he’ll combine with No. 17 and No. 18. He just hopes Goku and the others can surpass Super Saiyan.

And so, it has been almost a day since Vegeta and Trunks entered the Room of Spirit and Time. On the news, they say the mysterious devil has hundreds of thousands of victims now, and Piccolo gets pissed watching it at Kame House (he’s the only one awake). Then he looks out the window, and the artificial humans are outside the house. No. 17 asks if Son Goku’s here. Piccolo wonders if this is good or bad timing, and No. 16 says Son Goku isn’t here. Piccolo wakes the others up, and they all step outside. Piccolo tells them to leave, Son Goku isn’t here. No. 17 asks if they’ll say where he is, and Piccolo asks if he thinks they’d be so obedient. No. 17 says if they don’t tell, he’ll make them spit it up. Piccolo says to go ahead and try it, on another island with nobody on it. Piccolo tells the others to stay here as they fly off. No. 17, rolling up his sleeves, says this time he’ll kill him if he doesn’t talk. Piccolo, taking off his turban and mantle, says it won’t be as easy as before. 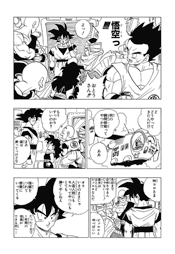 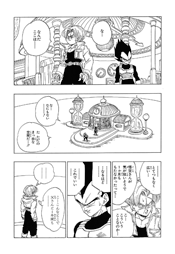 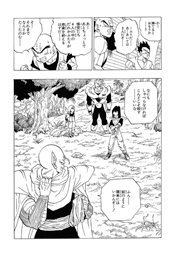