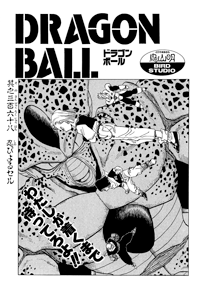 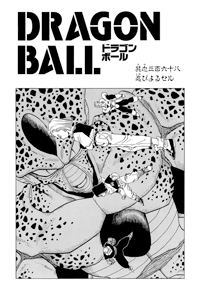 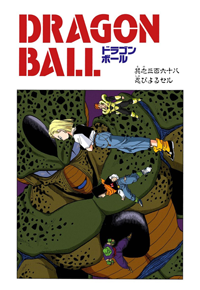 No. 17 says he has incredible power for not being an artificial human, even if he’s not Piccolo Daimaō. But he doesn’t care who he really is, he just wants to know where Goku is. However, Piccolo won’t say where he is. No. 17 says he’ll just have to continue fighting until he does want to talk. And this time they’ll get serious. No. 17 gets closer to Piccolo, while Piccolo charges up a bit. Then he hits Piccolo in the face and Piccolo swipes at him, but No. 17 ducks and delivers a hard blow to Piccolo’s gut. Then he elbows Piccolo in the back, knocking him to the ground. But Piccolo gets up, and does a few back flips to avoid a sweep kick from No. 17. Piccolo cracks his neck some, and tells him his speed is good, but he has no weight in his punches. No. 17 looks surprised, and can’t believe he’s saying such things to him, the strongest in all history.

No. 17 rushes at Piccolo, and Piccolo chops at him, but No. 17 jumps over it, then lands behind Piccolo. He flies at Piccolo and hits him in the back, and then Piccolo gives him a hard back kick. No. 17 punches Piccolo, knocking him back, but Piccolo flips up and head butts No. 17. No. 17 goes flying, but he catches himself, and the two break. Piccolo blocks a punch, then No. 17 blocks a knee shot, and the two of them exchange a few blows. Meanwhile, Cell is flying toward them saying that the long awaited day, where he’ll reach his perfect form, has finally come. At Kame House, Kuririn, Kame-Sen’nin, and Tenshinhan are outside, trying to keep up with the battle’s on-goings. Kuririn thinks Piccolo is doing awesome, but Tenshinhan is pissed they’re just sitting here like this.

Then Kuririn feels something approaching, and Tenshinhan says it’s Cell. Chi-Chi comes outside and tells Kuririn that Bulma’s on the phone, saying she’s found the artificial humans’ weak point. Bulma says No. 17 and No. 18 both have an Emergency Shutdown Circuit. If you stop them from moving, they can easily be destroyed, and she’s made a controller for that. Kuririn asks her if she could bring it right away, since Piccolo’s fighting one of them now, and she says okay. Tenshinhan thinks that’s great, but Kuririn’s not sure about destroying them. At God’s Palace, Gohan tells his father that Cell has begun to move, but Goku already knows. Goku thinks to himself, wanting Vegeta to hurry. “Vegeta’s a genius. By now he should already have gotten over the Super Saiyan barrier.” Meanwhile, No. 17 kicks Piccolo in the face, and Piccolo blasts him as a counter, and they break. Piccolo is panting, and No. 17 says their power is equal, but their difference in stamina is starting to show. His energy will never drop. But all of a sudden Piccolo begins to freak out. Cell has arrived on the scene! 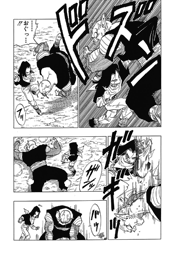 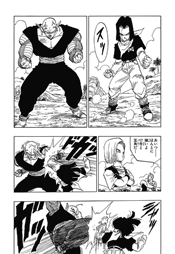 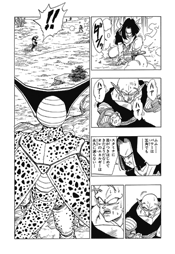