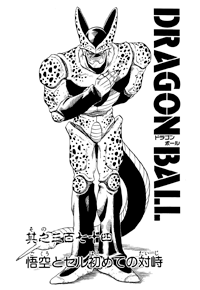 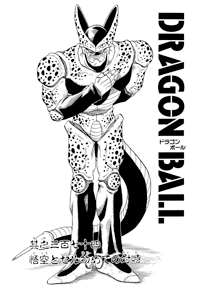 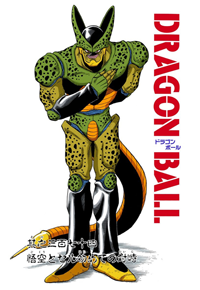 Gokū to Seru Hajimete no Taiji

Tenshinhan continues launching his Shin Kikōhō down on Cell, while No. 18 helps No. 16 to his feet and they fly off. Goku keeps yelling for Tenshinhan to stop. Tenshinhan uses one final Shin Kikōhō, before he finally drops to the ground. Goku feels this, and Cell starts to emerge from the pit. Cell gets pissed that she’s gone, and then decides to finish off Tenshinhan. Goku suddenly teleports to the battle, and Cell is shocked to see him. Goku tells Cell to wait one day and he’ll be able to fight against him, and then he’ll defeat Cell. Cell laughs and asks if he really said that, and Goku says yeah. Cell asks what’ll happen within the next day, but Goku ignores him and begins looking around. He says Piccolo’s still alive. Goku grabs Tenshinhan’s hand, and warps over to the edge of the island, where Piccolo has washed ashore. Cell wonders how he moved in an instant like that.

Goku picks Piccolo up over his shoulders, and says they’ll go to God’s Palace and get some senzu from Karin. Cell says he won’t let them get away, but Goku teleports away with Piccolo and Tenshinhan before Cell gets to them. Cell wonders about that strange technique of Son Goku’s, but decides Son Goku doesn’t matter right now, No. 18 does. She couldn’t have gotten far with the busted up No. 16, and Cell flies off. Meanwhile, Kuririn reaches Bulma’s plane, and explains that he thought it’d be faster to fly to meet her. She hands him the controller, and says it won’t work unless he’s within ten meters. Then she offers to give him some battle wear like Vegeta has, but he says Goku and everyone else needs that more than he does. He tells her that they’re up at God’s Palace, and Bulma says she’ll take it to them there. Speaking of God’s Palace, Goku has returned there, and Tenshinhan and Piccolo are healed. Mister Popo then yells out that Vegeta and Trunks are coming out of the Room of Spirit and Time. 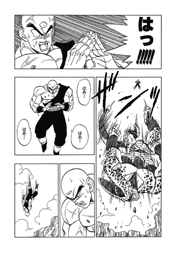 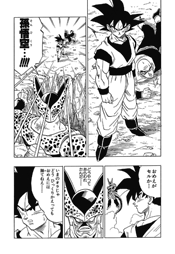 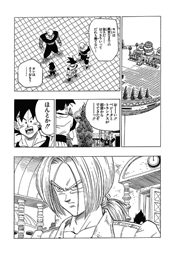