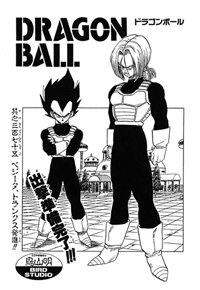 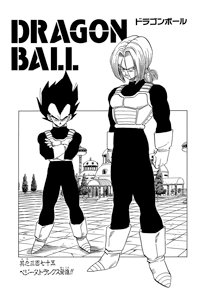 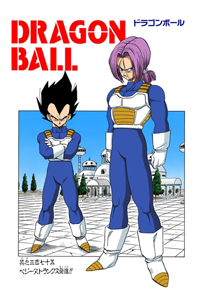 Their clothes are tattered, and Trunks’ hair has gotten longer. Trunks apologizes for the delay, saying his father had already overcome the limits of Super Saiyan in two months, but he wanted to use up all the time. Vegeta says that’s enough talking, and Goku supposes it went well. Vegeta says there’s no need for him to go train now, since he can now take care of Cell and the Artificial Humans. Goku says he saw Cell, and he’s an incredible monster now that he’s absorbed No. 17 and evolved. Then Bulma arrives, and she’s surprised to see Trunks with his hair so different, and he’s grown. He explains about having trained in a strange room for a year. Then she wonders why Vegeta’s hair hasn’t grown. Vegeta says that a pure Saiyan’s hair stays the same from birth. Goku realizes his hair is the same way.

Vegeta says that doesn’t matter, and asks Bulma what she came here for. She says she brought battle wear, and pulls out a capsule case full of it. Goku is surprised at how light it is, and Gohan says it reminds him of the one he wore on Planet Namek. Trunks also changes into one. Bulma asks Tenshinhan and Piccolo if they want one, and Piccolo says he has no intention of wearing the same clothes as the Saiyans and Freeza. Vegeta tells Kakarrot there’s no need for him to wear that, and Goku says it’d be great if Vegeta defeated Cell. Vegeta says he’s going now, and Goku offers to take him via Shunkan-Idō. But Vegeta refuses and flies off. Trunks says he’ll go too, but first Goku gives him two senzu to take. Bulma tells him not to die, and then Trunks flies off too. Goku tells Gohan now it’s their turn to train.

Cell is flying along over the ocean, and thinks with their speed, he should’ve caught up to them by now. He hasn’t seen a trace of them, so they must be hiding somewhere on one of these islands. Then Cell takes a deep breath, and screams, “Do you hear me, No. 18!!!! Show yourself!!!! If you don’t, I’ll destroy these islands one-by-one, you got that!!!! I’m not bluffing!!!! I bet you think I won’t since if you’re destroyed too, I can’t reach my perfect form. Too bad for you!!!! I really wanted to reach my perfect form, but as it is now, there isn’t anyone in this world who is a match for me!!!!” No. 18, hiding on an island with No. 16, is pissed at Cell. No. 16 tells her not to move, Cell badly wants to reach his perfect form and won’t destroy her. Meanwhile, Vegeta is on his way. 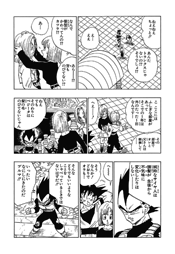 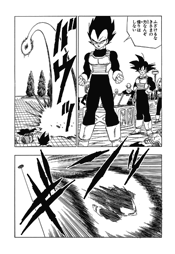 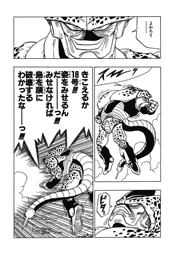