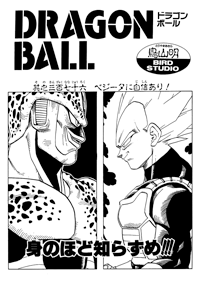 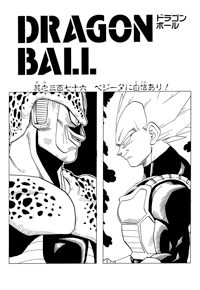 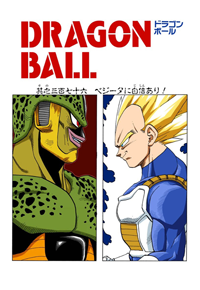 “So, come out!!!! Come out, No. 18!!!!” Nothing happens, and Cell realizes she isn’t going to reveal herself. Cell decides he’ll destroy this island first, a big one with a city full of people on it. Cell holds out his hand, and lets out a blast that blows the entire island out of the water. Cell realizes she wasn’t there, so he’ll try the next island, and keep going from there. No. 18 is worried, Cell really is destroying islands. No. 16 says his attacks aren’t strong enough to destroy her, but No. 18 is worried that No. 16 won’t survive. No. 16 wonders why Cell is making such a big deal out of this, since there’s already no one in the universe who can stop him. He supposes Cell just genuinely wants ultimate power, as Cell continues to blow up a couple more islands.

Vegeta is flying along, and decides to turn Super Saiyan along the way. No. 18 and No. 16 are rocked by an explosion, since the island next to theirs has been destroyed. No. 16 says Cell is watching for movement on the islands, and tells her to sit still. Cell prepares to destroy another island, the one No. 16 and No. 18 are on it seems, when Vegeta suddenly arrives. Cell is surprised, and Vegeta tells him to land. So, they both land on the island where the artificial humans (who are hiding in some trees) are. Cell thinks he’s come here to joke about defeating him, and Vegeta says he’ll blow Cell to bits. He can’t believe an ugly monster like him has some of his cells. No. 18 thinks Vegeta is stupid, since he could barely do a thing against her, never mind Cell as he is now. Trunks arrives, and Cell thinks they’re going to gang up on him. Vegeta says he’s just a spectator. “By myself, I’m enough to put you away.” 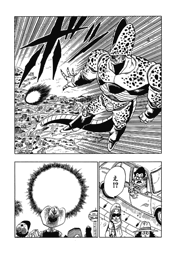 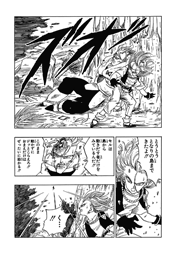 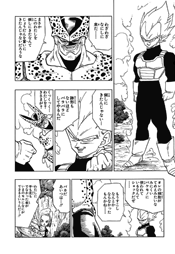