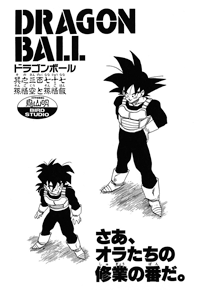 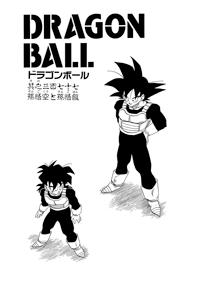 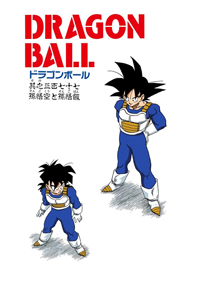 “What? You’re enough by yourself?! You’ll blow me to bits?!” Vegeta says that’s right, and Cell thinks he’s just talking stupid. No. 18 agrees that Vegeta stands no chance, and tells No. 16 this would be a good chance to run away. No. 16 says they should wait for the fight to start. But he thinks it’s strange that Vegeta’s battle power has gone way up since before. Vegeta says he’ll wipe that stupid smile off of Cell’s face, and Trunks thinks his dad intends to “become” it. Vegeta then starts powering up. At God’s Palace, Piccolo says it’s starting. He makes his turban and mantle reappear, and says Vegeta will show them his beyond Super Saiyan power. Meanwhile, Goku and Gohan are in the Room of Spirit and Time. Gohan says it’s all white, he feels heavy, and it’s hot and hard to breathe. Goku says with the door shut, the outer world is completely shut out, he can’t feel Cell or Vegeta’s ki anymore.

Goku tells Gohan that to the left is the bath and toilet, and over there is the food. And up ahead is where he couldn’t last more than a month when he was a kid. Gohan says it’s really vast, and there’s nothing here. Goku says it has the same amount of space as Earth, and if you go too far out there, you’ll get lost and die. The temperature changes from 50° to -40°, the atmosphere is about one fourth of the Earth’s, and the gravity is ten times that of Earth’s. Goku says they’ll start training now, and first make Gohan a Super Saiyan. Gohan thinks he might be in the way of his father’s training, but Goku says it’d be a great help to have a good opponent. Goku says he wants to surpass Super Saiyan and be stronger than anyone, but he intends for Gohan to get even stronger than that. Gohan says how in Trunks’ future he was a Super Saiyan, but still got killed by the artificial humans. Goku says it’s already way different from Trunks’s future, and besides, Gohan didn’t train here in the future. Meanwhile, Vegeta continues powering up, and everyone is amazed at his power. Vegeta is finally finished, and he is noticeably bulkier, with his hair thicker and spikier too. Cell is shocked, and then Vegeta flies forward and hits Cell hard in the gut. 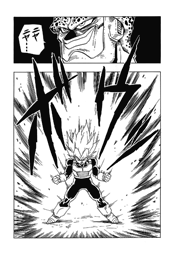 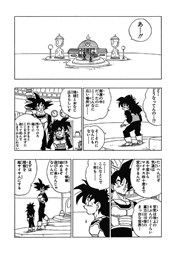 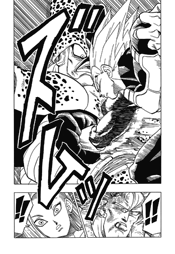