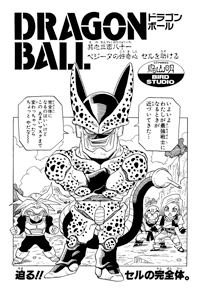 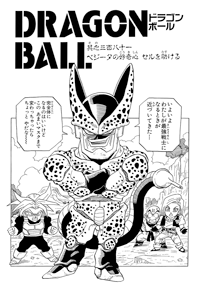 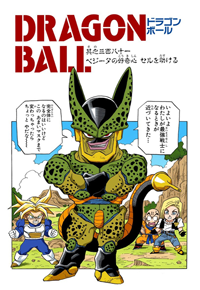 Trunks looks over at what Cell’s looking at, then he spots No. 18 too, and Kuririn is with them. He realizes they don’t know Cell has noticed them, and screams out, “Heeeeey!!!! Cell has found you!!!!” No. 18, No. 16, and Kuririn all freak out, and Cell flies toward them. Trunks says he won’t let him reach his perfect form, then he bulks up like Vegeta and follows Cell. Vegeta thinks it’s lucky the artificial humans were here, and then tells Trunks he won’t let him interfere. Trunks almost reaches Cell, but Vegeta kicks Trunks away, into a nearby mountain. Cell lands in front of them, and No. 18 and No. 16 prepare to fight him. Cell tells No. 16 not to do anything unreasonable while he’s on the verge of shutting down, and says that Vegeta wants him to reach his perfect form, too. Kuririn curses Vegeta.

Trunks gets up from the rubble and tells his dad he’s mistaken, they can’t let Cell reach his perfect form. Cell’s power might become far greater than their own, and then what will they do? Vegeta asks Trunks if he wants to see how strong Cell will get, and Trunks says not at all. He’s already seen it enough in his Hellish future. He says even if he has to defeat his dad, he’ll stop Cell from reaching his perfect form. Vegeta doubts he can even attack his own father, never mind defeat him. Trunks then lets off a huge two-handed blast at Vegeta, and flies over toward Cell. Cell then uses a Taiyō-Ken, blinding Trunks, Kuririn, No. 16, and No. 18. He opens his tail and sucks up No. 18, and Trunks and Kuririn freak out when they regain their sight. Vegeta is surprised Trunks really did it, but notices that Cell is changing. He’ll finally see his perfect form! 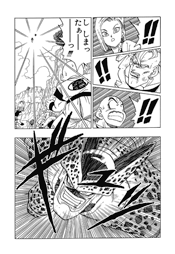 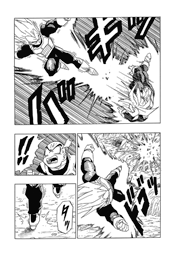 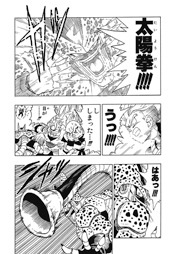