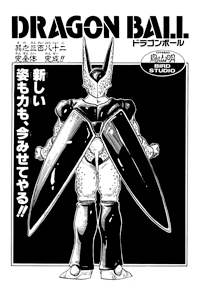 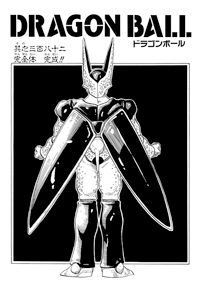 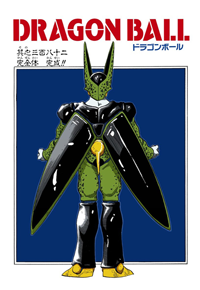 Cell is transforming, and Vegeta is pleased with this. Trunks thinks he’ll stop Cell right now, and tries to attack him as he’s transforming, but it seems there’s a barrier around him. Trunks gives up, and there’s a big explosive flash. The smoke then starts to clear. Up at God’s Palace, Piccolo tells Tenshinhan and Bulma that Cell has reached his perfect form. Bulma asks about the controller she made, and Piccolo tells her Kuririn broke it himself. But he blames Vegeta more. In the Room of Spirit and Time, Gohan has transformed into a Super Saiyan, and Goku tells him he’s done well. Then he goes back to normal and stops to catch his breath, saying it’s hard. Goku says they’ll take a break, and he’ll give Gohan a much needed haircut.

Cell’s perfect form: basically more smoothed out than last time, and less bulky. His tail is mostly gone, though his wings are more distinct now, and he has a much more human face now. Vegeta thinks this is good, while Kuririn is pissed at what he did to No. 18. Cell is looking himself over, and Kuririn angrily flies over and punches him in the back of the head, then kicks him. But Cell doesn’t flinch at all. Cell starts throwing his arms out, testing his own power, and then he turns around and kicks Kuririn in the side of the head, sending him flying. 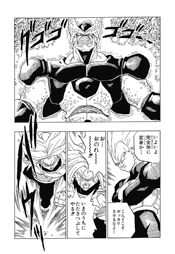 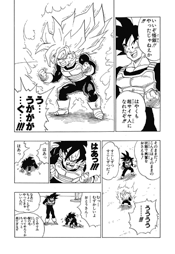 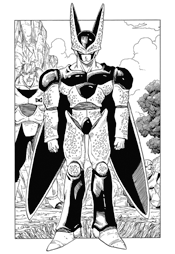