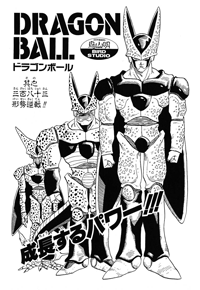 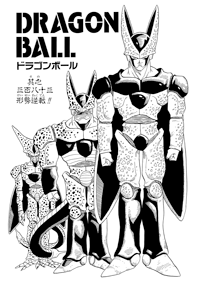 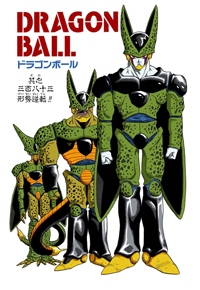 Trunks is worried about Kuririn, and flies over to him, giving him a senzu. Vegeta lands next to Cell, and says he looks happy, but he thinks his perfect form is nothing great. Cell turns to Vegeta and asks if he’ll help him warm up, and Vegeta says alright, but the warming up will be the end. Kuririn is okay, and Trunks says that was close. Kuririn says Vegeta will be killed. He’s not as great as the Saiyans, but he knows Cell’s strength and ferocity. Cell and Vegeta take their stances. Kuririn says don’t pay any mind to the ki you feel from Cell now, because he’s hiding tremendous power. Just like Trunks is. Trunks is surprised Kuririn noticed. Kuririn says Vegeta probably wasn’t paying attention, but he knows how Trunks is restraining himself, and he overcame the barrier that Vegeta couldn’t.

Vegeta kicks at Cell, but Cell blocks it. Then Cell blocks an elbow, and a few more blows from Vegeta. Trunks says his dad surpassed the limits of Super Saiyan, but one day, he got even farther than that. But he won’t let his pride-filled dad see it, not now when he intends to defeat Cell. Vegeta blocks a strike from Cell, and they break. No. 16 thinks Cell has gotten really strong, but Vegeta is still much greater. Vegeta is pissed, saying Cell still isn’t serious. Cell says that’s because that was warming up, and No. 16 freaks out. Vegeta yells to get serious now, it’s pissing him off. Cell says just a little, then flies over to Vegeta, surprising him with his speed. Vegeta kicks Cell in the side of the head, but Cell is completely unaffected, and laughs about Super Vegeta. Kuririn asks Trunks if he won’t go help him, but Trunks says his dad would rather be killed by Cell than receive help from him or Goku. 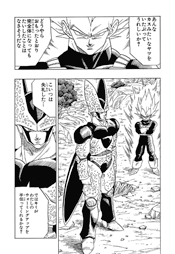 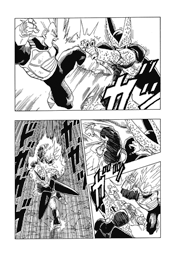 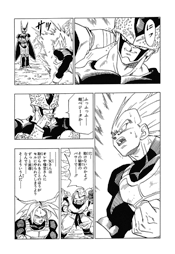