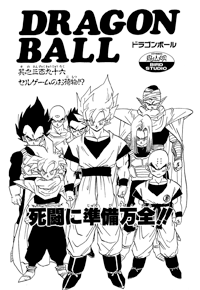 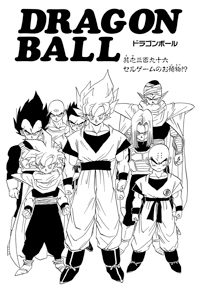 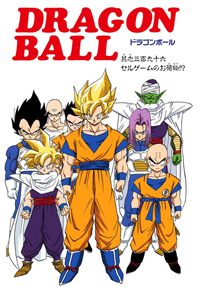 Cell tells someone to hurry up and get in the ring, and Satan says of course he’s going first. Goku warns Satan he’ll be killed, and he should stop, but Satan ignores him, while the announcer tells the cameraman to go over to the idiot over there. The reporter tells the world what this person just said to the world champion Mister Satan, and people watching around the world think Goku’s an idiot. At King Castle, the King is watching. The King thinks that man looks just like the boy who had saved the world from Piccolo Daimaō. But his hair and eye color are different, so it must not be him. However, someone else among them looks just like Piccolo Daimaō. Kuririn tells Goku not to worry, since they can just return him to life with the Dragon Balls, and Goku realizes it’s no use trying to warn him. Goku waves at them that it’s okay, and the announcer figures he realizes how great Satan is after all.

Satan takes off his cape, then his championship belt, and stares down Cell for a bit. Then he pulls out a capsule, pops it open, and he has a big bag. He opens the bag, and pulls out a bunch of tiles. Fifteen of them, and he stacks them all. Satan concentrates, and then chops through fourteen of them. Goku and everyone are silent, while Cell thinks he’s a real idiot. Satan tells him to look at those busted tiles — that’ll be him in one minute. Satan thinks this will be great for his popularity, with this even being recorded on video. Satan takes his stance, while the announcer goes on about the Cell Games starting, which will decide the fate of the world. Satan charges at Cell, and hits him in the face with his Dynamite Kick. He lets off a flurry of punches at Cell, until Cell finally swats him aside. Kuririn whispers to Gohan that he was actually kind of rooting for Cell on this one. Satan crashes into a nearby mountain, but somehow he’s still alive. Kuririn looks disappointed. The world is shocked that Satan got a ring out, and Cell says they’ll hurry and start the Cell Games now, and Goku steps up. Satan says he’s just taking a break, next time he’ll get serious. Vegeta can’t believe Satan still doesn’t realize how much greater Cell is than him. 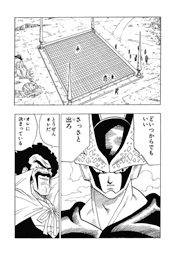 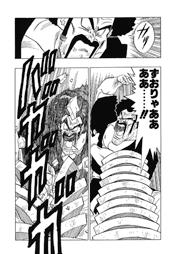 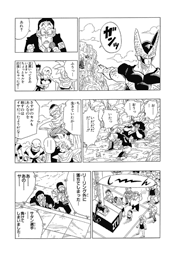