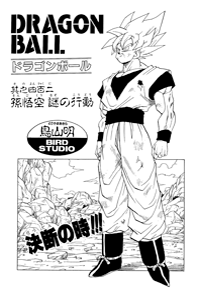 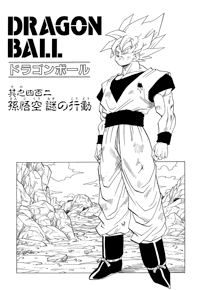 Cell punches Goku, sending him crashing into a nearby mountain. Cell charges after him, as Goku bursts out of the rubble and fires a whole bunch of blasts. Cell puts up a huge barrier to stop them all, as people around the world watch on TV. An old couple says that looks like Chi-Chi’s husband. Bulma is watching with Kame-Sen’nin at Kame House, and she thinks Goku’s doing great. Kame-Sen’nin doesn’t, though. “Goku can’t win… Not only that, but I can see that he’s fighting while knowing this. I don’t know what he has planned, but…” The barrier is gone now, and Goku is panting really hard. Cell says Goku’s strength looks to have gone down, and says he can have a senzu if he wants. That’ll make this an even greater fight.

Trunks yells at Kuririn to do like he says and give Goku a senzu, then he’ll definitely win. Vegeta yells at Trunks to shut up, saying he has no Saiyan pride. Kakarrot would probably rather die than win like that. Right now, he’s not even fighting for the Earth’s sake. “It pisses me off to admit it, but with just that special training, I couldn’t surpass Kakarrot. That bastard’s a genius. But, Cell is one or two steps higher than the present Kakarrot.” Trunks asks what they’re supposed to do, be quiet and watch? “Are you the one that’s always saying, ‘He must be planning something.’ Have some faith in him.” Cell asks Goku if he can’t eat a senzu because of his pride, and that Goku’s chances of winning have gone up a bit.

Goku says nothing, then smirks, lands, and the aura around him disappears. “I give up! This is a submission! I know your strength very well now! So I’ll stop.” Everyone is shocked, and the cameraman relays to Satan and the announcer that he said he was giving up. Cell asks Son Goku if he realizes what this means. If there’s no one left to fight in the Cell Games, everyone on the Earth will die. Goku says there’s still one left to fight him, but Cell says it’s the same difference, Vegeta and Trunks aren’t even as strong as Goku is. The announcer tells Mister Satan it’s his turn again, and Satan freaks out. But, oh no, Satan suddenly gets a stomach cramp. Too bad… Goku asks if it’s okay for him to pick the next person to fight, and Cell realizes he’s serious about giving in. Vegeta wonders what the Hell’s going on, since there’s nobody who can win. 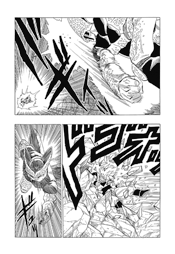 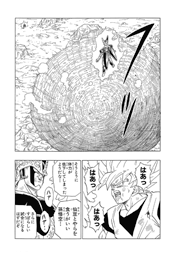 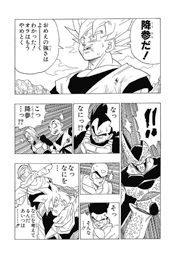