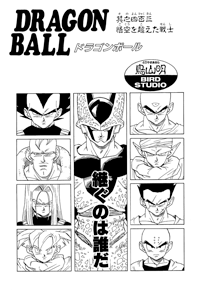 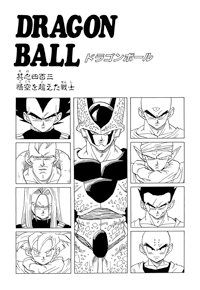 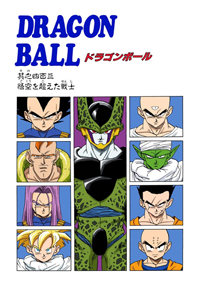 The Warrior Who Surpassed Goku

Goku says this fight should end the Cell Games. If this person can’t win, no one can. Everyone wonders who he means. Goku says that now after having fought against Cell, he’s sure this person can win. So he’s going to leave it all up to this next person. Cell asks if he’s saying that this person is stronger than him (Cell), and Goku says yeah. Cell wants to know who it is, then. (Hopefully it’s not Mister Satan, who still has a stomach ache.) Goku says, “It’s your turn, Gohan!!” Everyone is shocked, including Gohan. Piccolo thinks Goku’s an idiot, wanting to watch his own son die. The cameraman relays that he said it’s “Gohan’s turn”, and the announcer thinks he’s being careless, wanting to take a break to have bentō at a time like this. (gohan also means rice/meal).

Goku flies over to the cliff where everyone is standing now, and asks Gohan if he can do it. Gohan is surprised, and Piccolo says of course Gohan can’t fight. Goku says Gohan’s a lot stronger than they think, and he’s always been able to keep up with them. Not even Goku was like that when he was a kid. Kuririn doubts he could really be that strong though. Goku says in the Room of Spirit and Time, Gohan’s deeply sealed away dormant powers started to come out. Goku says to Gohan that he didn’t think the fight between him and Cell was that great, right? “No, I didn’t think so. But, neither of you were fighting all out, right?” Goku says he doesn’t know about Cell, but he was going all out. But to Gohan, it felt like Goku was doing shoddily. Piccolo asks if that’s true, and Gohan says yes. Vegeta can’t believe that brat is so strong. Goku tells Gohan to do it, restore peace to the world so he can become a scholar.

Gohan agrees, then takes off his mantle and flies over toward Cell. Goku asks Kuririn for a senzu, and then tosses it to Cell. He tells Cell to eat it, and Kuririn thinks he’s crazy. Goku just wants the fight to be fair. Cell thinks they’ll regret that, and eats the senzu. Cell feels his full strength again, and Piccolo thinks Goku’s being reckless. But then Gohan starts to power up, blowing everyone away. 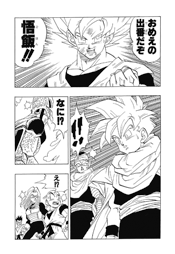 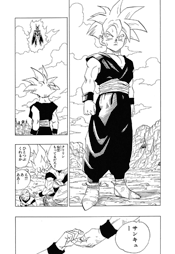 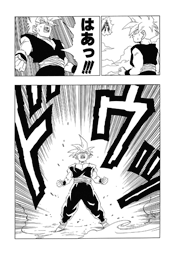