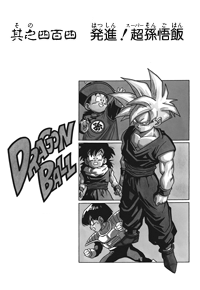 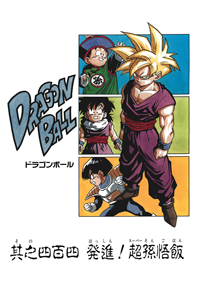 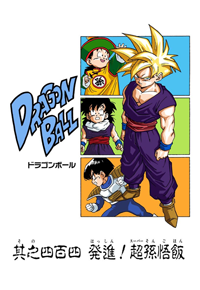 Everyone is shocked at Gohan’s power, except Goku. Piccolo can’t believe that’s Gohan, while Vegeta wonders how that brat could’ve gotten such a huge battle power. Cell says Son Goku was right about Gohan being strong, but he was exaggerating to say he could beat Cell. And Son Goku’s son will die because of his miscalculation. Cell lands, and turns his attention to Gohan. He kicks at Gohan, but Gohan blocks it. Cell backs off, then charges at Gohan, but Gohan jumps out of the way. Cell turns to follow him and goes for a kick, but Gohan dodges. They both land, and then Cell grabs Gohan by the shirt and headbutts him hard. Then he hits Gohan in the face, before throwing him into the air. Cell uses a shockwave to send Gohan flying through some mountains. Kuririn and Trunks are worried, and Chi-Chi, watching at home on TV with Gyūmaō, faints.

The announcer wonders what’s going on. They said they were going to eat rice, but instead there’s a boy challenging Cell. Piccolo blames this all on Goku and his naiveté, saying he’s the one who killed Gohan. Goku tells him to calm down, Gohan’s ki hasn’t dropped at all, and Kuririn and Trunks notice it too. Cell says the lame joke is over, now he wants Son Goku to eat a senzu and come back to fight again. But Goku tells Cell to look behind him. Cell turns around, and Gohan is walking out of the rubble, barely damaged at all. Cell is very surprised to see him. Gohan says, “Let’s stop this. A fight like this has no meaning.” Cell laughs, and says the Cell Games has plenty of meaning: for him, it’s amusement, for them, it’s to save the Earth. “The truth is, I don’t want to fight. I don’t want to kill. Not even an awful person like you. I don’t have a love for fighting like my father does.”

Kuririn and the others can’t hear what Gohan is saying. Cell says he knew Gohan doesn’t like fighting, but had no idea Gohan didn’t want to kill him. He says Gohan couldn’t kill him in a hundred years. “I’m gradually starting to understand what my father meant about me being the only one who can defeat Cell. When I used to get angry, I would get incredibly powerful beyond my own will, and I’d start to fight really crazily. So, that must be what my father detected.” Cell thinks Gohan said all that to try to scare him, but instead, he’s going to try to make Gohan angry. He then proceeds to punch Gohan in the face. 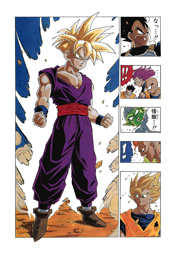 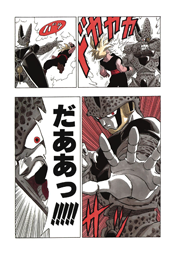 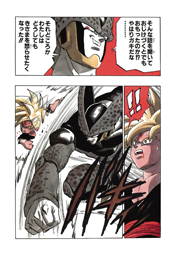